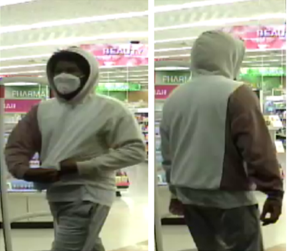 The FBI/Philadelphia Police Department Violent Crimes Task Force is seeking the public’s assistance identifying and locating three subjects responsible for at least nine robberies of city Rite Aid stores, some of the same locations more than once.

All of the robberies have taken place between 7 p.m. and 10 p.m.

The usual scenario has one or more of the subjects entering a store, displaying or indicating the presence of a gun, making threats, and demanding money.

On several occasions, a subject has gone behind the front counter to hurry store employees, or put hands on an employee and physically directed them to a cash register or office. (No employee has been physically harmed.)

The robberies have taken place at stores in Oak Lane, Hunting Park, Olney and one at 8130 Roosevelt Blvd. on Oct. 28. The robbers took $300 in that crime.

The suspects are all black men in their 20s, 5 feet 10 or 5 feet 11 inches tall. They are considered armed and dangerous.