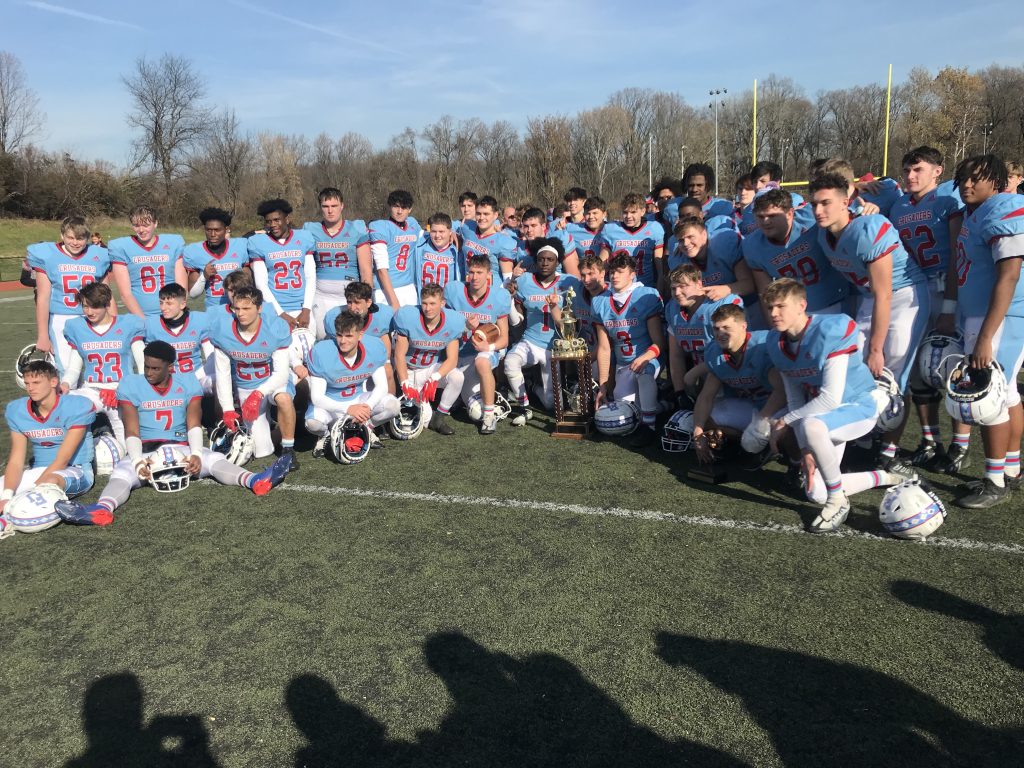 When Father Judge junior quarterback Tyler Yerkov was a backup, he had a chance to watch Mike VanHorn direct the offense.

VanHorn, who graduated in June, ran the ball a lot and was effective.

Yerkov, too, runs the ball a lot and piles up the yards as well.

“I looked up to him. He was a leader,” Yerkov said of VanHorn. “I just run the ball with heart, like he did. He was a mentor.”

Yerkov had a big day on Thanksgiving, rushing 20 times for 62 yards and three touchdowns and throwing a TD pass to lead Judge to a 28-12 victory over Abraham Lincoln.

The Most Valuable Player for Judge was Jake Marquis, who rushed for a team-high 63 yards, caught three passes for 40 yards and intercepted a pass.

Yerkov was happy to see a senior get the honor.

“Marquis runs hard. He’s a physical running back. I’m happy he was the MVP,” the QB said.

“Everybody loves him and respects him,” McArdle said. “And he’s a great student.”

Lincoln’s MVP was quarterback Khani Knight, who rushed for a touchdown and threw for 109 yards. Dyrell Steele Jr. won the Sportsmanship Award.

“They’re not big, but they play with a lot of heart,” he said.

The Judge offense is not too fancy, with Yerkov and Marquis gaining positive yardage on the ground and several successful screen passes.

“Our offense is run right at your face and you have to stop us,” Yerkov said.

Marquis wasn’t stopped on Thanksgiving and played most of the season with an injured left wrist suffered in a September game against Frankford. He worried a trip to the doctor would cost him the football season. He’ll miss the wrestling season to have the wrist heal, and his future includes applying to become a steamfitter and taking online accounting courses.

A year ago, he starred in the Thanksgiving game with a rushing touchdown and two interceptions. This time, he and Yerkov simply ran behind an offensive line that created just enough space for them to move the chains all day and give the seniors back-to-back Thanksgiving victories after no game in 2020 due to COVID.

“It’s old-time football. We made the plays. They couldn’t stop it,” Marquis said.”

McArdle will miss Marquis and the other seniors.

“He had a great career for us,” the coach said. “He’s a complete player. He did whatever we asked.”

Yerkov also plays basketball and is on the track and field team. He’ll miss Marquis and the other nine seniors graduating, but is looking forward to next football season.

“We’ll be a complete team next season. We’re going to be a pretty good team,” he said.

The 2023 Crusaders will be led by players such as Yerkov, Appling, Eric Smith, Kysheion Dawkins and Dane Pizzaro.

“I’m excited for what we have coming back,” McArdle said. ••