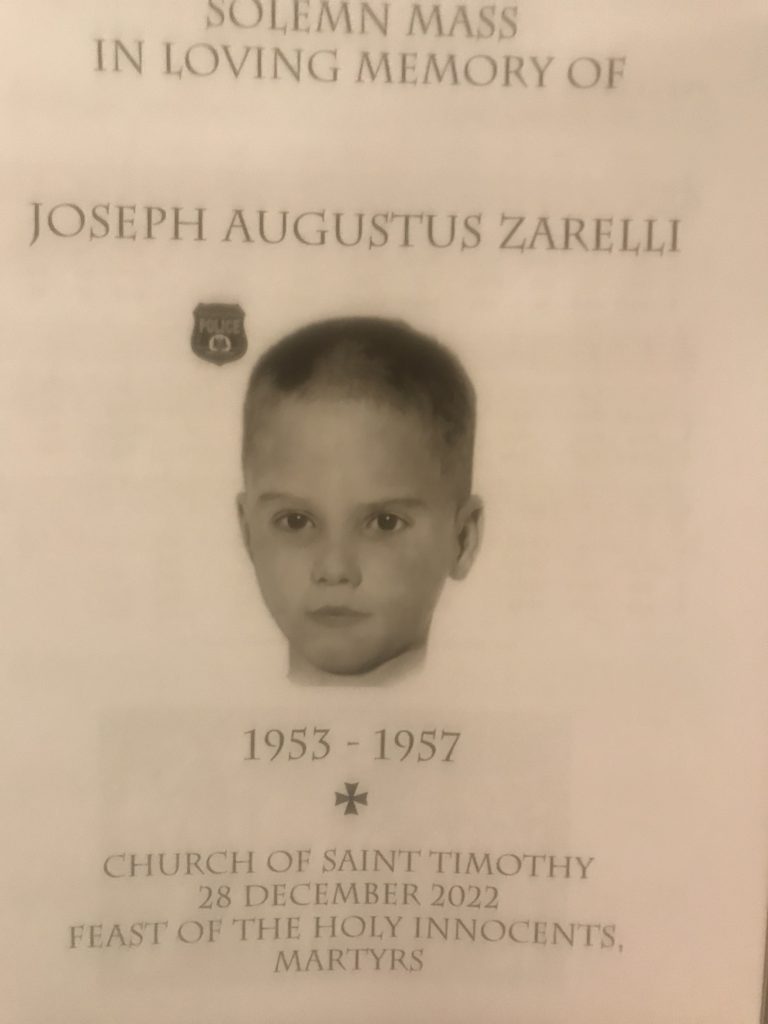 St. Cecilia and St. Timothy parishes last week offered Masses on the Feast of the Holy Innocents for the happy repose of the soul of Joseph Augustus Zarelli.

Meanwhile, Bill Fleisher, of the Vidocq Society (which tracks unsolved murders), announced that Joseph’s name will be added to a headstone where he is buried at Ivy Hill Cemetery, in West Oak Lane, on Friday, Jan. 13, at 10 a.m.

For 65 years, Joseph was known as America’s Unknown Child and the Boy in the Box.

Police announced on Dec. 8 that he had been identified, thanks to work by detectives, modern forensics, the Medical Examiner’s office and Identifinders International.

Joseph’s body was dumped unceremoniously on then-rural Susquehanna Road, a little west of Verree Road, in Fox Chase in 1957. He was found in a bassinet box from the JC Penney at 69th and Chestnut streets in Upper Darby, having been killed by blunt force trauma.

As no one reported Joseph missing or claimed him after he was found, he was buried in Potter’s Field at 12898 Dunks Ferry Road. He was later reburied at Ivy Hill after his body was exhumed in a search for forensic evidence.

At a news conference last month, police said forensic evidence led them to a birth certificate showing Joseph was born on Jan. 13, 1953. He was 4 when he died and lived near 61st and Market streets.

Joseph’s parents have passed away, but he has living siblings. Police have not identified the siblings or said where they live.

The Rev. Christopher Walsh, pastor at St. Cecilia, was the celebrant and homilist at the Dec. 28 Mass at the church located in close proximity to where Joseph was found. Today on the 700 block of Susquehanna Road, a private historical marker stands in memory of Joseph. The public was invited to the Mass to pray for Joseph and to give thanks for the efforts of those who supported the police department in its search for dignity and justice for the boy.

St. Timothy collaborated with the Michael the Archangel Ministry – which provides multi-denominational care, crisis ministry and spiritual enrichment for active and retired FOP Lodge 5 police officers and their families – to hold a Mass for Joseph and in thanksgiving for officers and detectives who worked on the case for decades.

“What we do tonight keeps the memory of Joseph alive,” said the Rev. Michael Olivere, pastor at St. Timothy.

Olivere said Joseph “has been with God” since the moment of his death, adding, “God took Joseph to himself.”

The pastor also told the police personnel in the crowd that, “God is with you every day.”

Olivere – who led the crowd in a Hail Mary for gravely ill Pope Benedict XVI – thanked the Rev. Charles Noone, in residence at St. Tim’s, for having the idea to celebrate a Mass for Joseph during the Christmas season.

Noone joined Olivere in celebrating the Mass, as did the Rev. Jim MacNew, chaplain for the Michael the Archangel Ministry, and the Rev. Jack Kolodziej, provincial for the Oblates of St. Francis de Sales. ••