Mac & Cheese for a cure 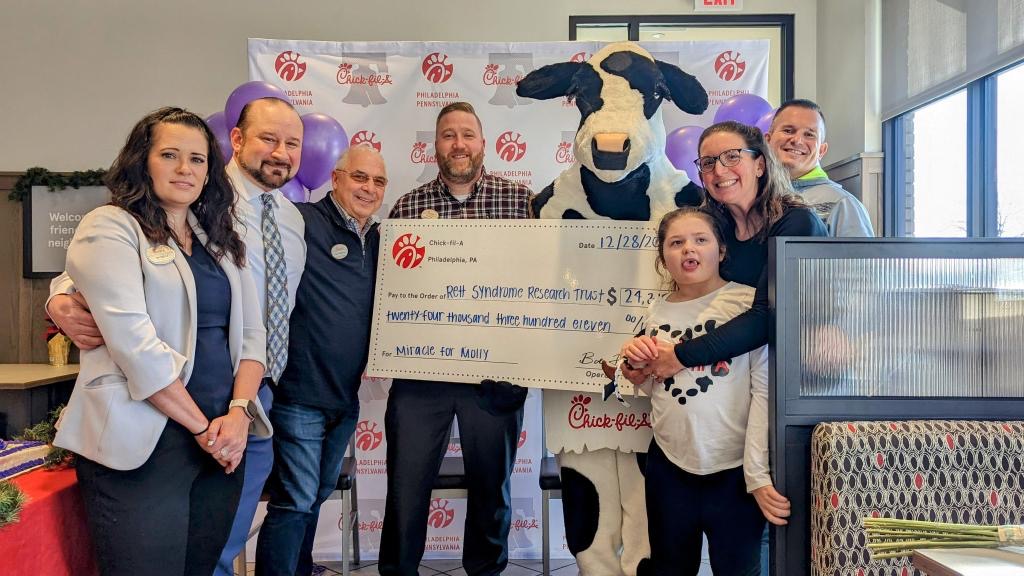 Local Chick-fil-A restaurants raised more than $24,000 for the Rett Syndrome Research Trust through a campaign called “Mac & Cheese for Molly,” which took place in October in honor of Molly Foley, a fifth-grader from Delanco, New Jersey who suffers from the disorder.

The Foley family are neighbors to Robert and Michelle Fanelli, who own both the Somerton and Whitman Square Chick-fil-A locations on Roosevelt Boulevard.

“We’re so appreciative of Chick-fil-A and their support,” said Molly’s mother Danielle Foley.

Mac & Cheese for Molly involved 13 Chick-fil-A restaurants in Bucks, Montgomery and Philadelphia counties. Each restaurant donated 35 cents from each Mac & Cheese sale in the month of October to the Rett Syndrome Research Trust. Rett Syndrome is a rare neurological disorder that causes severe impairments and affects a child’s ability to speak, walk, eat and breathe. It mainly affects young females. When Molly was diagnosed, the Foley family began a search for the cure by hosting “Miracle for Molly” at the Merion in Cinnaminson to raise money for research.

“A cure is closer than ever because of your work, your example, your courage and your persistence to obstacles thrown your way,” Robert Fanelli told Molly during the check presentation. “The work you and your family are doing will enrich eternity.” ••