CORA Services hosted its annual Champions For Children event on Giving Tuesday, honoring individuals and an organization that have made the community brighter. 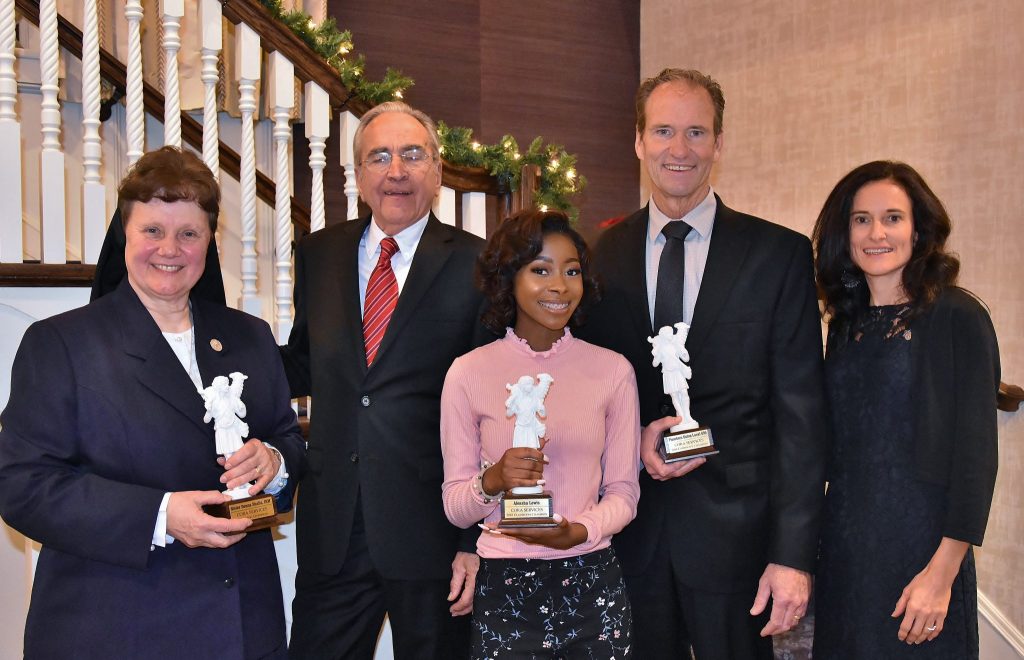 On Giving Tuesday last week, CORA Services held its Champions For Children, which honored two individuals and an organization who have helped create a brighter future for local children and families.

Lewis is a freshman at La Salle University who graduated from Mercy Career & Technical High School. She is a nursing major hoping to become a nurse practitioner specializing in psychology.

She became pregnant at 16 during her sophomore year at Mercy, and said she wouldn’t have known what to do if not for her family as her support system.

She finished high school while being a mother, which she said is one of the most difficult things she’s ever had to do.

Her daughter Azuri, now 2, was at the event.

Sister Donna Shallo was at Little Flower High School for 27 years, including 18 as president. She stepped down earlier this year. She was honored for her service at the school, including fostering a caring community at the school.

“I was fortunate to enter a community that was principally engaged in education, and for 50 years I was so privileged to deal with families and children,” she said.

Shallo shared a meditation with the crowd where she considers if she would have made it as far as she did without others supporting her. She gave thanks to the school’s alumnae, faculty and staff, as well as her family.

“The last 27 years was the highlight of my life being at Little Flower,” she said.

Plumbers Union Local 690 was recognized for its above and beyond service to the city and for the feeling of family it’s fostered for the past 40 years.

“What I can assure you is the people of the next generation of the Plumbers 690 will stand side by side with the people of CORA,” said John Kane, business manager and financial secretary-treasurer of 690.

The event was hosted at the Union League of Torresdale and the theme of the night was creative nonconformity. AnnMarie Schultz, CEO of CORA, recounted a story of a woman who was not allowed to cross the street to look after children, so she dug a tunnel beneath the road.

“That is creative nonconformity,” she said. ••