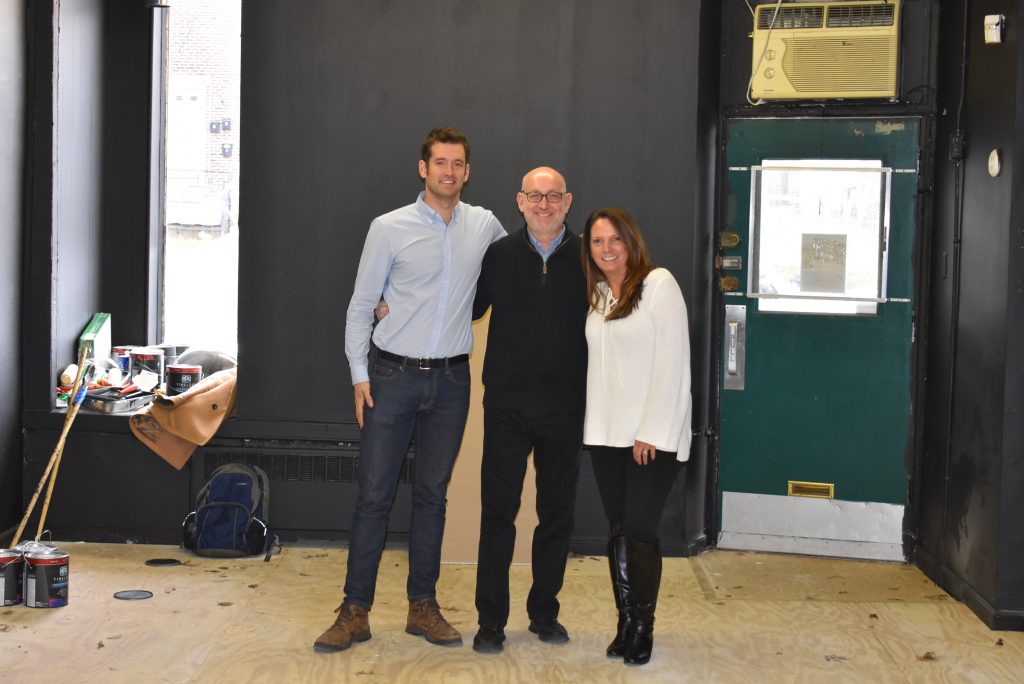 After sitting vacant for years, the property at 6243 Frankford Ave. now has freshly painted black walls – and a new purpose.

Mayfair BID will operate a black box theater in the space, which will be right next door to Lucky Cat Brewing Co., soon to be Northeast Philadelphia’s first microbrewery. The space will be used to host theatrical shows and plays, musical and comedy acts, movie festival and artistic events, and probably more.

“This property has been sitting vacant for years,” said Marc Collazzo, Mayfair BID executive director. When Mike Scotese, owner of Grey Lodge Pub, told Collazzo he wanted to put Lucky Cat at that property, he knew it was the right time to move in.

“We always knew we wanted to use this space as a destination spot,” Collazzo said.

Tentatively called the Mayfair Black Box (the name is still being finalized), opening night is slated for March 15 of next year. Quick progress has put them about two and a half months ahead of schedule – the building was purchased in October, and renovations for the building that can fit a maximum of about 100 people at a time are already well underway.

A black box theater is a transformable space with black walls and floors and simple decorations that can be used flexibly to create whatever stage is needed depending on the event. The tentative schedule, which has programming through December 2019, features attractions like theater performances, art classes, open mic nights and burlesque and drag shows.

“We want to be less traditional,” Collazzo said. “When we show movies, we want to have a bad sequel night, or for Halloween we would have a festival of B-rated horror movies. We want people to think of the Mayfair Theater.”

The main entrance to the theater will be through Lucky Cat, which Scotese recently announced would be the first microbrewery of its kind in Northeast Philly.

Mayfair BID has partnered with John Cambridge, artistic director of Wings of Paper, on the project. Wings of Paper is a new community theater organization that plans to bring “homegrown” theater to many Northeast neighborhoods, and will provide much of the programming to the black box.

“This is the only space of this type in this area,” Cambridge said.

The black box will tie in local businesses by sponsoring them and allowing them to sponsor shows.

“We want people to come here and then hit he avenue to eat, drink and shop,” Collazzo said.

The theater will also sponsor resident artists who will be given workspace and a platform to display their work. Cambridge said local businesses, such as the Insectarium and Butterfly Pavilion, of which he is the owner, will sponsor the artists and give them places to work as well.

Both the black box and Wings of Paper will introduce themselves to the community in March with a production of Almost, Maine, a show comprised of several short plays about, in Cambridge’s own words, “a journey and a change of perspective.”

After the theater opens, Mayfair BID hopes to partner with artists, bands and anyone who wants to be involved. Even though it won’t open for another three-plus months, Collazzo said people have already reached out to them about potential shows.

“We’ve been looking for a destination spot on the avenue,” said Randi Sherwood, marketing director for Mayfair BID. “We wanted a place that nobody else has that would drive people from outside their little community, as well as helping artists spread their wings.” ••