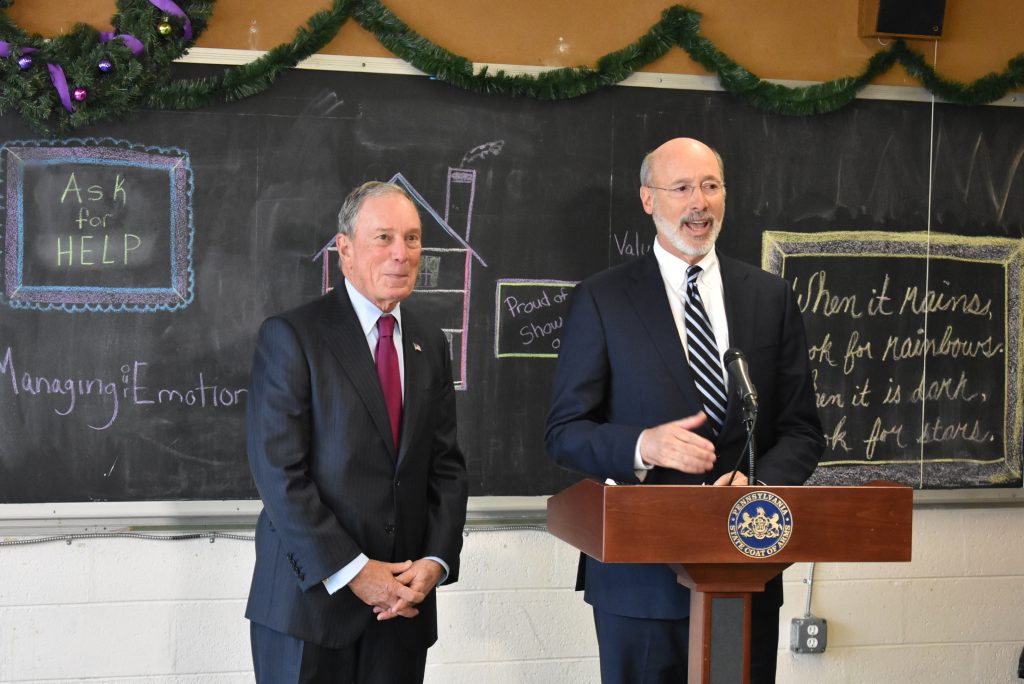 Gov. Tom Wolf and former New York City Mayor Michael Bloomberg on Friday announced a $10 million grant to the state of Pennsylvania to fight the opioid epidemic. An announcement took place at The Bridge Way School, the state’s only recovery high school, in Holmesburg.

Bloomberg, founder of Bloomberg Philanthropies, said he would donate $50 million over three years to help 10 states impacted by the epidemic. Pennsylvania is the first state to receive a donation due to the high number of deaths in the state. In 2017, over 5,400 people died from overdose-related deaths in the state — more than double the national average.

“It’s a crisis, and we just have to do something about it,” Bloomberg said.

Bloomberg Philanthropies will work with the Wolf administration over the course of three years. It’s unclear exactly how the money will be spent, but a statement released after the announcement said funding will target staffing, technical assistance and data collection.

“This $10 million is going to help us do more of what we need to do to bring all these programs to scale,” Wolf said. “Seventy-two thousand people did die last year in the United States in overdoses. All 72,000 deaths were unnecessary.”

The announcement was first made at the inaugural Bloomberg American Health Summit in Washington, D.C. earlier that day.

“America, for the first time since World War I, has had its life expectancy go down three years in a row,” Bloomberg said. “In America, you and your friends and your family’s chances of living longer are declining.”

While at Bridge Way, Wolf and Bloomberg talked to staff and former and current students about their experiences overcoming addiction. Bloomberg asked what can be done to keep kids from trying drugs in the first place.

“I always thought it wouldn’t be me. I’m upper-middle class, I just never thought. If I had somebody come in and share their experience with me, and say I am also these criteria that is not your typical addict, I would say, wow, maybe that could be me,” the graduate said.

Bridge Way is currently the only recovery high school in the state. It is partnered with CORA Services, which focuses on prevention before the person even tries the drug, as well as intervention.

“This money is going to go a long way to support programs that are going to tie all levels of addiction services together,” said Mary Doherty, of CORA.

Doherty said her field of work might be the only one that wants to put itself out of business.

“We want to become redundant, because the scourge of drug and alcohol addiction can be defeated,” she said. “It is a contagious disease, so let’s do this prevention and intervene earlier.”

Reno, a Bridge Way student, was inspired by the event in more ways than one. He was able to talk to the governor’s bodyguards about security, a field he is considering going into after he graduates.

“I’m graduating this year in June, and that’s a year earlier than I was supposed to graduate,” he said. “I’m focused on my academics instead of the streets and drugs and stuff.”

He wants to attend college at CCP to study construction for a few years with the possibility of moving on to a four-year college or moving into trades.

“I wasn’t focused on any type of job, and didn’t know what I wanted to do when I grew up,” he said. “I saw other ways and tried new things in the three years I’ve been here.” ••

3 local students picked for internships through Bank of America

A dog and guinea pigs up for adoption