Phillies Preview: Harper is here to lead Phillies to the World Series 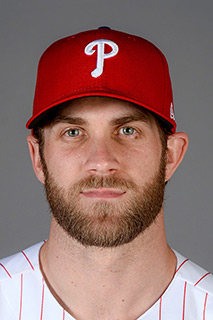 The honeymoon among Phillies fans, the city of Philadelphia and Bryce Harper started March 2 when the 2015 league MVP signed a then-record 13-year, $330 million contract that does not have an opt-out clause in it.

The Phillies didn’t sign someone to that kind of contract because they were looking at a nice player to help their club contend.

Phillies managing partner John Middleton made that level of commitment to Harper for the sole purpose of him leading his team to the World Series, and as many titles as possible.

At Harper’s introductory news conference, he talked about coming to the Phillies because of the family atmosphere, the fans and the bat-friendly stadium.

It took almost 40 minutes for him to say what Phillies fans wanted to hear from him, which is the bottom line.

“I want to bring a title back to [Philly], I want to be on Broad Street, I want to be on a frickin’ boat or a whatever, thing, a bus, whatever it is, have a trophy over my head and do that,” Harper said. “That’s what it’s all about. At the end of the day, I want to be able to go to sleep and know that I gave it my all and was able to bring back a title to the Philadelphia Phillies organization, to Mr. Middleton, Mrs. Middleton and to the whole city of Philly and the fans. That’s what I want to do, that’s what I feel I want my legacy to be.”

To do that, the 26-year-old will have to be more productive in the postseason. Harper has impressive regular season stats, offensively. He is an on-base machine. He led the Washington Nationals to the postseason in four of his seven seasons there.

But once there, it has been a disappointment. Four playoff series, zero wins.

In eight playoff series, Phillies immortal Mike Schmidt won three of them, including the 1980 World Series. He batted .236 during those 36 postseason games with just four home runs.

So superstars in baseball do not always have great postseason stats. Schmidt lost his first three postseason series before breaking out and winning a championship.

But Harper has to do better to warrant the investment the Phillies have made in him.

The Las Vegas native talked about keeping expectations realistic for the first few seasons. He said the National League East is a beast.

“The thing about the East, it’s a juggernaut,” Harper said. “I’m not going to say that we’re going to come in this year and win a World Series, win the division or anything like that. Of course, that’s what we all want to happen. That’s your goal when you come into spring training, That’s the goal of the fans, that’s the goal of everybody.”

Harper continued to talk about how it takes time for a team to come together.

“Good things take time as well,” Harper said. “You have to mold as a team, you’ve got to mold as an organization. You have to understand the guys in the clubhouse and make that a family…everybody pulling on the same rope every single day. I think this organization and us can be very successful for a long time…but it’s going to take some time. It’s going to take some time for guys to get going and understand how to win and what it takes to win. [It’s a] long haul of a 162 [-game] season plus a possible 21 games in the playoffs. This organization has gone through that, this organization has been able to do that in years past. And I know a lot of guys want to feel that now. I’m excited to be part of that, part of the group.”

The Phillies won the World Series in 1980 and 2008. Since 1883, the year they were founded as the Philadelphia Quakers, that’s it — as far as winning the whole thing.

Flyers can find a good player with 5th pick