In response to your story on the state hearing about Roosevelt Boulevard pedestrian safety — sadly, the speed-kills myth is alive and well in Pennsylvania. A real 25-state analysis was done of National Highway Traffic Safety Administration data, which showed that 1.6 percent of crashes are caused by excessive speed. Barely above zero, then.

Nowhere does anyone ever put into a bill that speed limits must be posted at the 85th percentile free-flowing traffic speed. This is so that the ticket industry can thrive. Set the limits too low, ticket barely above them, get municipal radar and speed cameras, then watch the money flow in. Since this is still not enough, the state now wants more LIDAR and moving radar. You can expect more crashes, safe drivers cited, and lots of erroneous tickets with poor policies.

The mentioned devices flopped elsewhere and will here. The state wants money, whether from red-light cameras, speed cameras, stop-arm cameras, or municipal radar. Multiple media outlets stated that after red-light cameras were installed in Philadelphia, crashes went up, yet people still say they went down. Be careful who you listen to with traffic issues.

Maximum safety on roads occurs when we have speed limits posted to the 85th percentile free-flowing traffic speed, yellow traffic lights set to actual approach speeds with realistic perception and reaction times, and stop signs only where needed.

In the meantime, we ignore issues like distracted drivers, pedestrians and bicyclists.

Please contact your state representative, state senator and the governor to oppose the above in Pennsylvania and demand best-practice engineering. Tickets should also be only points, no fines or surcharges.

We are back to the city of Philadelphia having to give every addict their injections.

I firmly believe that this will also encourage too many addicts and people considering getting a high and not worrying about killing themselves.

No, they will have the city encouraging a shot (comparatively safe, in their eyes). There is always a chance it won’t be safe. So all of us taxpayers who can hardly pay our bills will be open to lawsuits with having these safe injections or failed “safe injections.” This most certainly will encourage a lot of new junkies into our city. 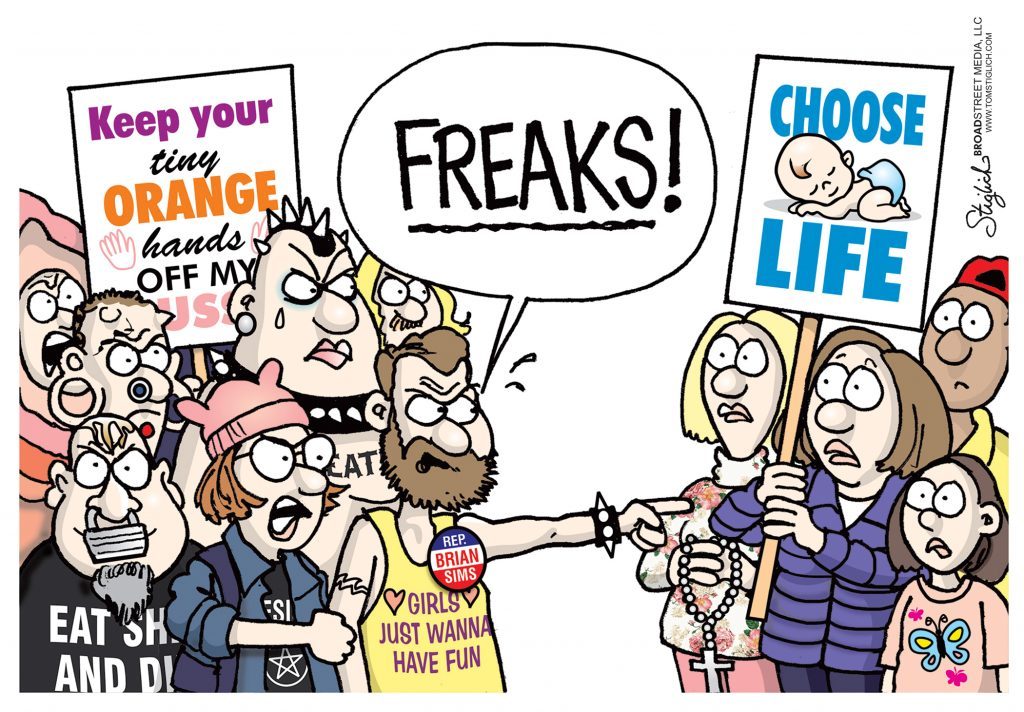 Is nothing sacred anymore?

To any mother who might have received a statue of the Blessed Virgin Mary in a grotto for Mother’s Day, I hope you enjoy her.

I did for 15 years until some lowlife thief in the night stole her from my garden in the front yard.

To the thief: How low you are to have the nerve to steal a religious statue. How can you ever expect good health, happiness and protection from the same Virgin Mary you took from me? You will not. I curse you.

The theft has been reported to the 8th Police District.

Rocky roads in the NE

I would say all of us do not like driving on the potholed “rocky roads” of State Road and Torresdale Avenue.

There are so many potholes it is not easy to drive on these two roads. Any plans to repair them?

It is shocking to realize that there have been over 200 gun shootings in our city since the start of 2019. This averages out to more than one shooting a day.

Will there ever be an end to such violence?

Maybe, if there was a ban on assault weapons plus curtailing the number of weapons a person can buy.

It is without a doubt that people have expressed their concern to legislators. However, nothing or very little is done.

What would it take, another shooting or a mass shooting to get more powerful regulations in place?

There is a cry in our city. Stop the violence.

A waste of time

Doesn’t he care Australia hasn’t enough cricket bats while Brazil, whose citizenry doesn’t even play cricket, has too many?

In this country, his focus should be on why Mississippi has all those s’s; same time, neither North Dakota nor Maine have a single one. His research staff might find additional states missing equally critical letters.

And our very own commonwealth has yet to name an official state palm tree.

Too-clever-by-half politicians arrange these junkets to avoid decisive House and Senate votes, where declaring one way or the other would irk significant numbers of constituents. Watch ‘em conveniently skedaddle out of town before roll call.

Let’s not forget, Pennsylvania’s masters of disguise voted themselves a raise by adroitly wording the bill so “nay” meant “yea.” Every one of that body showed the sass to stand before we, the people and pontificate, “I get enough money/Times are tough/I voted against it/Look at my record/I’m honored to serve.”

All across our city, homeowners are starting to receive their 2020 property tax assessments. As is usually the case with our city government, many of them are higher than the previous year — which means so is your tax bill.

This puts us all in a pinch — as both homeowners and renters figure out how they are going to afford increased property tax bills or higher rents caused by increased taxes. That, of course, is on top of a city wage tax that is simply too high and must be reduced.

City Council needs to remember who it represents. Philadelphians of every stripe are hard-working people who often live paycheck to paycheck; they simply can’t absorb higher real estate taxes year after year — especially when the services provided continue to lag behind. For senior citizens living on a fixed income and who don’t qualify for the tax freeze program, the problem is even worse.

We need leaders who understand these facts and are willing to make the tough decisions to address the problem. Right now, a bill has been put forward by City Councilman Brian O’Neill to ensure that property tax assessments are revenue neutral. This means that even if the city says your property is worth more, your tax bill stays the same. I fully support the intent of this legislation and, if elected to City Council, will work to help make it a reality. It’s time for city government to really give taxpayers and renters a break.

I have lived in this city all of my life and I have never been so dismayed at the state of our city than I am now.

Our murder rate is out of control. The AVI tax initiative has been found to be flawed (who is surprised by that one). The controls of city government are in the hands of a group of politicians who are corrupt, incompetent or both.

The John Dougherty and Bobby Henon scandal is the latest symptom. Look at our district attorney. What a joke. I say we don’t have a real district attorney, just another branch of the public defenders office.

Larry Krasner emboldened the criminal element by his mind-blowing plea bargains and his failure to charge accordingly for serious crimes.

Our mayor is an idiot. His soda tax is an absurdity that merely forces people to go for groceries outside of the city. Since we are a border city, it is but a short trip to Bucks or Delaware counties or even New Jersey to escape this regressive tax.

The problem is there is no effective opposition to the corrupt, incompetent Democratic Party that has ruled this city like an arrogant monarch.

Why is this so? Because we, the people, let them get away with it and consistently refuse to hold them accountable. I also blame the Philadelphia Republican Party, which has all the energy of a rigor mortis cadaver and seems to be satisfied with the crumbs bestowed upon it in the form of patronage jobs by the Democrats.

Why is Philly the poorest big city in America? Why is crime out of control? Because the Democratic Party and its minions have pursued policies that make it so.

So, as the march out of our city by those who are talented, educated, competent or disgusted continues, we will be stuck with those who are left.

For too many people who now call this city home, the only alternative to the status quo is to vote with their feet and leave.

Bobby Henon has been championing the long-overdue improvements to the 15th Police District building.

I just wonder who will get the electrical contracts for the jobs? Anyone care to guess?

Councilman Bobby Henon has done an outstanding job of uniting the seniors in and around his councilmanic district.

Bobby just finished sponsoring a bingo event at the Northeast Older Adult Center, where seniors from his entire councilmanic district were invited to enjoy bingo, friendship and good food. Bobby even jumped into the action calling a number of bingo games himself.

Councilman Henon’s staff did an excellent job of organizing the event. The staff of the Northeast Older Adult Center are to be commended for their help as well. Bobby’s staff also provided valuable information for the seniors during the event.

Councilman Henon and his professional staff have sponsored a number of events, information sessions and trainings for his constituents in the 6th Councilmanic District.

Bobby, the seniors say thank you for all your help and support.

From the first day I met Rep. Jared Solomon, he said, “Call me Jared.”

What a really fine and dedicated politician.

His office has helped me so many times with my problems, and I am so grateful they solved all of them. What a terrific staff, always ready to help me any way possible.

Jared, you are doing a great job for the people and the neighborhood. We all respect you very much.

Rep. Jared Solomon, I am truly proud to say I know you. You will go far.

President Trump suggested we send all the illegal/undocumented people crossing our borders to sanctuary cities.

Our mayor, expressing an opinion of one, said Philadelphia would welcome all of them.

If our mayor is really sincere, then he should personally share the burden that he is imposing on all of us.

He should be required to take into his home a family of at least four. This should be for a period with a minimum of two years. His responsibility would be to put them through the citizenship process and everything else necessary to  become completely self sufficient so not to place a burden on all of us.

The other Council members who supported him should have to do the same. It is only fair that those who are in favor of this should be personally responsible.

If they do not, there should be a question on the ballot during the next general election allowing the voters to decide if they want to be a sanctuary city.

You should also include if we want term limits for City Council.  I seriously doubt if any of the above will actually take place since it will require City Council approval.

Remember a government of, for, by the people?