Starting in August 2016, several NFL players, led by then-San Francisco 49ers quarterback Colin Kaepernick, began protesting during the playing of the national anthem before the start of NFL games.

Kaepernick was the first to take a knee during the anthem as his way of bringing attention to supposed police brutality and racism against minorities across the country.

The protests spread when Kaepernick, who left the 49ers after the 2016 season, was not offered a job the next season with any NFL team.

The protests polarized not only NFL fans but the whole country.

It got worse. In September 2017, the NFL protests became more widespread when over 200 players sat or knelt in response to President Trump’s calling for owners to “fire” the protesting players.

The NFL was trending down the year the Eagles broke through to win the first Super Bowl in franchise history.

Luckily, cooler heads prevailed, with the league and the players. Eagles players — past and present — had a big hand in lowering the temperature with all parties involved.

The nonprofit’s mission statement listed on its website states: “Our members are solution focused and invest personal time and resources to educate themselves on various issues affecting their communities to identify where their influence can have the greatest impact.”

The foundation for this effort was somehow able to start while all kinds of chaos was going on throughout the NFL and the country.

The Eagles’ other starting safety, Rodney McLeod, who joined the Eagles in 2016 as an unrestricted free agent, talked about how he got involved.

“The Players Coalition formed through Malcolm and Anquan Boldin,” McLeod said at his locker on the final day of minicamp. “I was recruited and informed about everything they were doing through Malcolm. It opened my eyes to a lot of things that’s going on in society and how we have a platform and ability to affect change. I wanted to be a part of that.”

McLeod said they found a partner more than willing to join their cause, their boss.

“We went out and got the NFL on board,” said McLeod, who played college football for the University of Virginia and signed with the St. Louis Rams (now the Los Angeles Rams) as an undrafted free agent in 2012. “They’re doing things with all 32 teams now, where they’re actually allotted a certain amount of money we can use to go towards different areas to affect social justice, bill reform, tying things in with police and tying things in with the community; bridging that gap back as well as impacting education and economic advancement as well.”

“Guys on this team, Malcolm, Chris Long last year, Nelson Agholor, Derek Barnett and Michael Bennett, we all put our heads together and decided how that money was going to be divvied up in the Philadelphia community,” McLeod said. “A lot of guys graciously donated their money, as did a lot of other players. It paid dividends and helped this community out a lot.”

One dividend was getting bail bond issues front and center…and being addressed.

To get the effort started, Eagles players actually were able to get nine people the bail money they needed to get out of jail while awaiting trial for relatively small crimes.

“That’s just us being persistent and being selective of who we stand by,” McLeod said. “And using our platform and our voice to our advantage. We got behind some of these public defenders and people that are doing the right thing, that are seeking social justice and are being fair. We want to give a lot of our citizens their second chance at life. We had an opportunity to bail people out who shouldn’t be in jail. That was all because of our voice and our platform and just trying to see change and start trending in the right direction for our country.”

Former Eagles All-Pro cornerback Troy Vincent, now the vice president of football operations for the NFL, talked about how the league and the players realized how much they were letting outside forces cause them to hurt the very product that gave them their platform to affect change.

Vincent brought up examples of how the league and players stopped going at each other and got some things done together.

First, the matter with NFL players Kaepernick and Eric Reid was settled. Then they addressed issues the players wanted the league to help them with.

Vincent talked about the “Players Coalition” in Philly and its members that included Jenkins, Long and McLeod, and what they accomplished in 2018.

“Many tried to divide,” Vincent said in a March interview in his office at NFL headquarters in New York. “And it appeared there was a division. And there was. There were differences of opinion, differences on how we address issues. Now you see this partnership.”

Vincent said: “Now that we started to come together on things that we agreed upon and how we approached it…we’ve seen law changes, we’ve seen policy changes.

“Even in Philadelphia, we had bail reform,” Vincent continued. “Bail reform has changed, cash bail has changed in the city of Philadelphia. Malcolm Jenkins and that group did it. So when we look at what has been accomplished, there has been a lot. Voting registration …just some of the things that we have been able to do together over the last 24 months. It didn’t start that way. Then it became very clear that we had a partnership.”

McLeod was asked how much easier it is to get things moving forward by working together and listening to each other, rather than crossing swords. 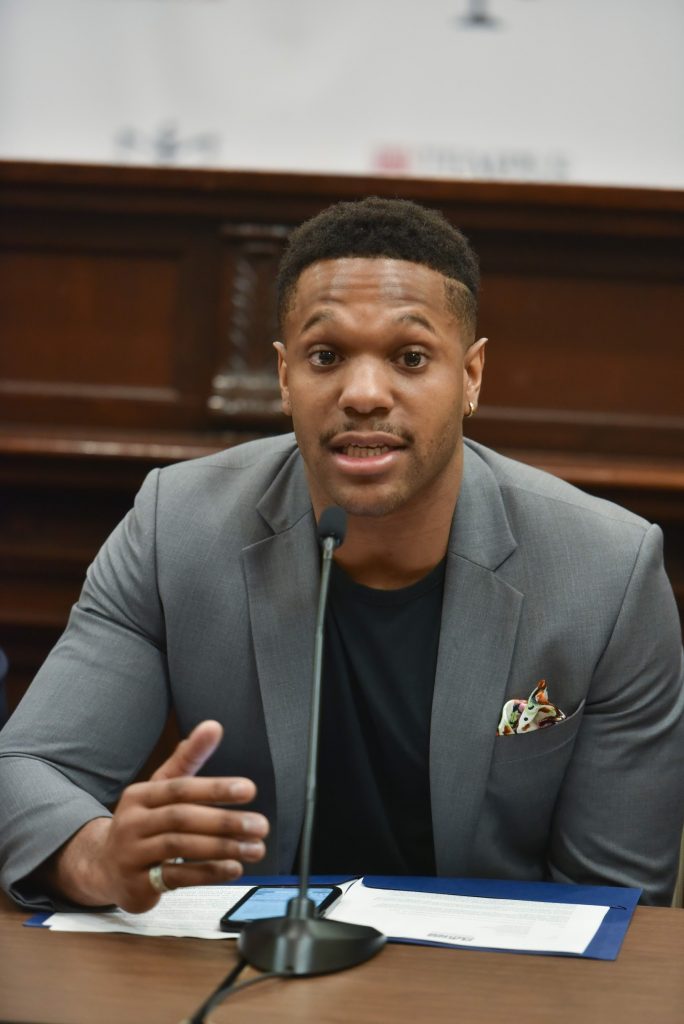 “I would agree,” McLeod said. “I think we are going about it the right way. I think it (the Players Coalition) is going to have a lot of promise and hopefully see more of that and encouraging more players to get on board. But I’m loving what the NFL is doing and how they’re standing beside us. I think it’s great.” ••

Ruk has MVP season for Bambies