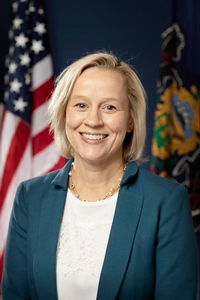 Thirty-one dead and many more injured in less than twenty-four hours. Every time we think it can’t get worse, that we can’t get more outraged, it does and we can. Saying enough is enough is no longer enough. It’s way past time for legislators to address this crisis.

Gun violence is a public health crisis and addressing it needs a public health approach that includes legislative efforts as well as conversations among community stakeholders like police, corrections officers, social workers and health care professionals. We need common-sense gun safety legislation such as universal background checks and an assault weapons ban. Even though seat belts don’t prevent every accident, we still wear them to keep ourselves safer. It is our opinion that measures can be taken that will meaningfully reduce the risk of harm to our communities while at the same time respecting and protecting the Second Amendment. We are committed to engaging in an open, honest and bipartisan conversation in Harrisburg. We challenge and implore our colleagues to join us in taking bold and concrete steps to finally end the scourge of gun violence so our communities can learn, worship, shop and play without fear of another mass shooting.

We know that domestic violence is a predictor of gun violence. One common-sense but effective tool in the war against gun violence is banning individuals with open Protection from Abuse orders from having weapons. A person with a proven and documented disposition toward violence should not have access to a gun. This includes people who not only have an open PFA order, but those already convicted of violent crimes, those convicted of stalking, domestic violence, etc. Some of these individuals are already banned from owning a weapon, but this list needs to be updated and expanded.

Action is also needed in the area of mental health. While we dispute the assertion that gun violence is primarily a mental health problem, and we remind you that the vast majority of people suffering from mental illness are non-violent, the fact remains that most mass shootings have been perpetrated by young men who’ve exhibited warning signs. Mass shooters rarely explode spontaneously. If effective and timely mental health treatment was more accessible to at-risk individuals, we could intervene faster. We have supported legislation that has enacted assisted outpatient treatment and is now law in Pennsylvania, but it will take time and money to properly implement the policy. We also need more mental health beds in Pennsylvania so at-risk loved ones can receive treatment before ending up in the criminal justice system – currently, our largest provider of mental health care.

The federally enacted Mental Health Parity Statute says that mental illnesses, including addictions, must be treated and covered by insurance in the same ways as physical illnesses. People struggling with depression or bipolar disorder should be treated the same as if they had a broken leg or diabetes. Unfortunately, this is not yet the case. Insurance companies need to be held accountable and be made to fully comply with the letter and spirit of this federal law. We have both authored and co-sponsored numerous bills in Harrisburg to accomplish this objective.

Another proven effective tool we need to use in addressing gun violence is the Gun Violence Task Force. The GVTF is a joint effort of the Philadelphia District Attorney’s Office and Office of Attorney General. It has already taken thousands of illegal guns off of Philadelphia’s streets. Unfortunately, many of the gun sales this task force is targeting occur privately, at gun shops and gun shows outside the GVTF’s jurisdiction. Rep. Murt has introduced legislation (House Bill 1365) to expand the jurisdiction of the GVTF to Allegheny, Dauphin and Lehigh counties so that the task force can more effectively target illegal gun sales where they occur. This legislation also increases coordination with federal authorities to share information and maximize the charges and sentences for the biggest gun traffickers.

These are only some of the measures that can be taken to address the gun violence epidemic that threatens our commonwealth and nation. These policies and others addressing gun safety MUST be considered and debated in Harrisburg before more families and towns suffer. Together, we can improve the health, wellbeing and safety of all Pennsylvanians. ••