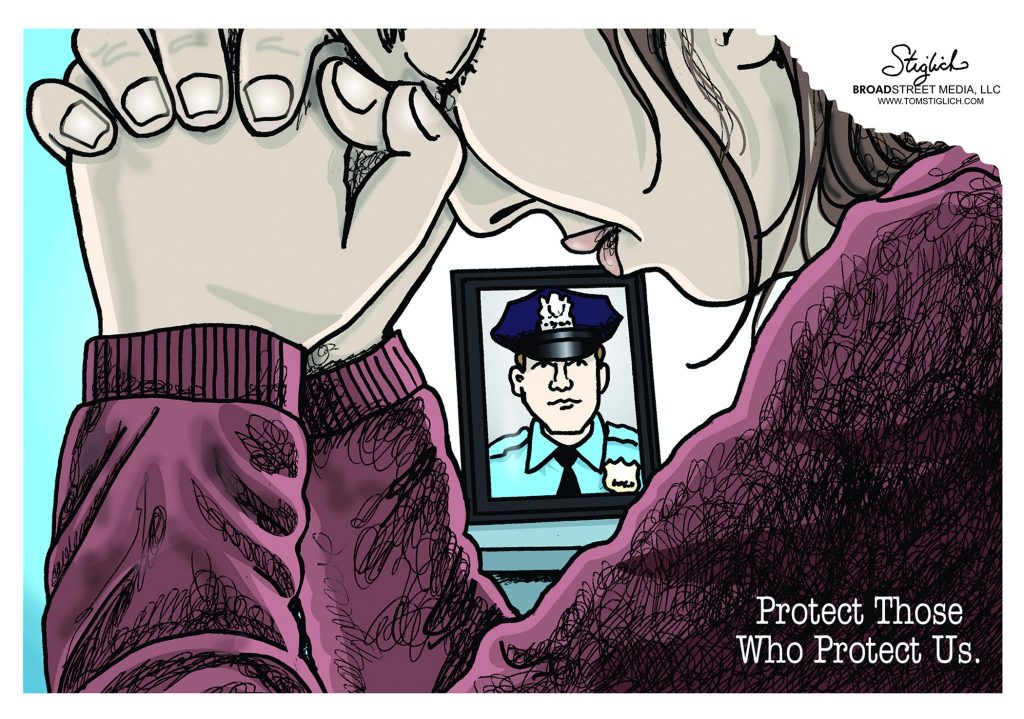 The heroism of the Philadelphia Police Department was noticed on a national level on Aug. 14. As we went to sleep, these fine men and women made certain we were able to close our eyes safely in bed. Our first responders, and their families, deserve our most sincere gratitude.

It’s reprehensible that continuously they are attacked physically and verbally, while being critiqued under a microscope with a higher level of scrutiny. If we expect our police to hold themselves to a higher standard, then why aren’t “We the People” protecting them from the verbal and physical attacks that rain down on them 24/7.

It is our right to live in a safe community. This cannot happen without a strong police/fire department that is fully funded and fully supported by all of us, including city, state and federal elected officials. Our first responders put themselves at risk, by being shot at or running into burning buildings, to save us. They do not care what we look like or what neighborhood we live in. Our life matters to them.

The police have been taking bullets for the public for a long time, it is time that we start standing with them and make certain that they are protected as they protect us. They have rights, too. We need stronger laws to protect the police and our first responders from the abuse they are plagued with daily.

It is way past time to deal with our gun problem. We cannot continue to allow guns to be so easily obtainable. This is a public health crisis that blaming video games, mental health and a troubled legal system will not fix.

The only thing that each of the many tragic incidents in our country have in common is guns and the totally unnecessary AR-15 rifle. It’s time to defend our public and not our special interests.

Why wasn’t shooter in jail?

Gee, Mayor Kenney finally came out of his hole and he’s “a little angry about someone having all that weaponry.” The particular person has a history of gun violations and should be in jail.

The system has failed and put citizens in danger. The city has handcuffed the police, and the DA is mollycoddling the criminals. It seems the inmates are running the insane asylum. I guess Kenney will go back into his hole until the election.

In response to “St. Dominic Church added to historic register,” which printed on Aug. 14 in the Northeast Times:

Your recent article on the historic register being applied to certain buildings was an outstanding example of people and governments running amok.

It appears that historian Celeste Morello takes great pride in submitting buildings she has nothing to do with for registration as historic, allowing her to collect the approved names to hang as trophies on her “accomplished” wall. A question she should ask herself could be, does this action do good, or is it rather a feel-good action to serve herself. She has left Father Kearns with higher bills for whatever needs to be done to maintain the church building for protection from what?

Since there was no authorization from the church to apply for registration and will cost them added expense so Ms. Morello can admire the building, wouldn’t it be appropriate and just for the city to withdraw the registration unless Father Kearns decides to pursue the matter himself?

Shouldn’t the Register of Historic Places be in contact with the building owner to ensure agreement, since the owner will be saddled with restrictions and higher costs to maintain a historic building?

In response to Ed Vanderslice’s Letter to the Editor, “Stop poaching at Pennypack,” which printed on Aug. 14 in the Northeast Times:

In regard to poaching at Pennypack, I checked with the Fish and Boat Commission.