Roh posted a picture of an Oct. 4 protest by supporters of murdered police officer Danny Faulkner outside of Krasner’s office and tweeted, “There’s something about this picture, can’t qwhite put my finger on it.” 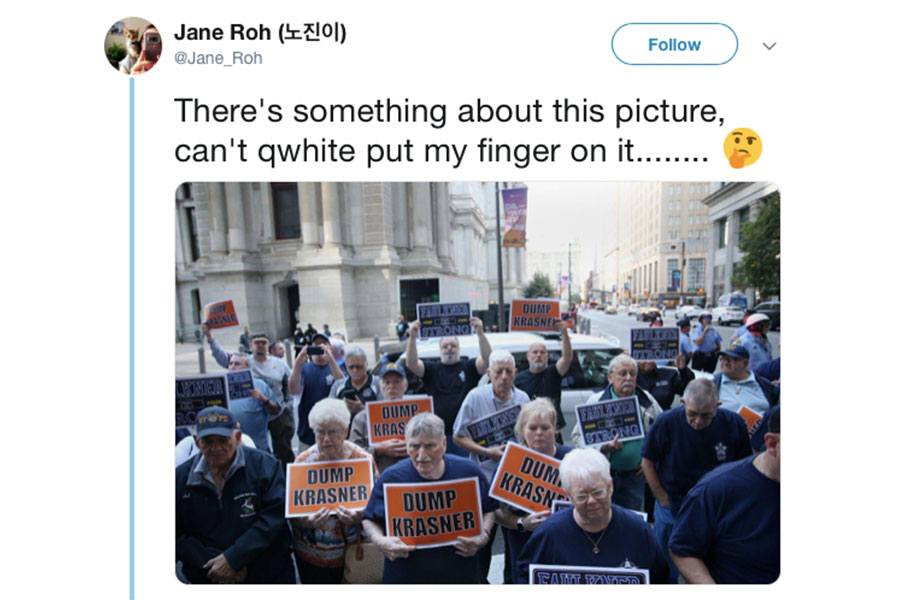 “Larry Krasner needs to fire his communications director, Jane Roh. She discounted these protestors’ opinions simply because of their race,” Wolfe said. “This is the very definition of racism and has no place in Philadelphia’s government.”

Roh also wrote, “did everybody go to Denny’s after,” referring to a restaurant that some blacks have complained discriminates against them. She followed that up with, “who ordered the rooty tooty fresh n’ fruity,” though that is a pancake item on IHOP’s menu. Wolfe suggested she was referring to the protesters as white “deplorables” who patronize what she sees as a low-end establishment such as Denny’s. She later deleted the tweets, an action that Wolfe characterized as “cowardly.”

“If a member of Krasner’s staff made public statements disparaging a group of African-Americans simply because of their race, does anyone seriously doubt that they would be fired in an instant,” Wolfe said. “Why is there a double standard with this district attorney?”

Wolfe said the lack of action by Krasner is another slap in the face to Faulkner’s widow, Maureen. She was not in the picture that Roh commented on, but was holding a “Larry Krasner is a Liar” sign as she spoke.

“Maureen Faulkner has been fighting for justice for her husband’s murderer for 38 years,” Wolfe said. “Larry Krasner has lied to her, dropped the appeal in cop-killer Mumia Abu-Jamal’s case for killing her husband and now is not contesting Abu-Jamal’s appeal in Superior Court. No one deserves this sort of treatment, but certainly not Maureen Faulkner.”

Working Families Party candidates Kendra Brooks and Nicolas O’Rourke, both running for City Council at-large seats, have issued a debate challenge to all five Republican and the five other independent and minor-party candidates in the Nov. 5 general election.

Brooks and O’Rourke aren’t bothering to invite the five Democrats, who are seen as sure winners because of their voter-registration advantage. The top seven vote-getters are elected.

“Philadelphians deserve to hear from the candidates asking for their support because this year, there is a truly competitive contest for the two minority-party seats. Our city has a choice this November. We’re at a crossroads, and who Philadelphians elect for these minority-party seats can change the course of our City, which is why it’s time for a debate,” Brooks said.

O’Rourke said, “Trump Republicans are hurting us in Harrisburg, they’re attacking our values in Washington, and they pose a threat to working families here in Philadelphia. We are ready to represent an independent, progressive and people-powered future in contrast to Republican policies ready to roll back wins for working families and civil rights’ protections.”

The Brooks and O’Rourke campaigns have volunteered to coordinate details for a debate, anywhere and anytime.

“Replacing two do-nothing Republicans with leaders like Kendra Brooks and Nicolas O’Rourke means justice for communities and workers affected by the Philadelphia refinery; it means a true plan to create a Green New Deal; and it means public ownership of the infrastructure that powers our city,” said Sam Bernhardt, state director of Food & Water Action.

City Councilman Bobby Henon (D-6th dist.) was unanimously endorsed for a third term by the Philadelphia Council AFL-CIO. The endorsement vote took place at the AFL-CIO headquarters at 22nd and Market streets.

“Bobby Henon is from labor, for labor,” said AFL-CIO President Patrick J. Eiding. “No other member of Philadelphia City Council has a better understanding of the challenges and opportunities that confront labor than Bobby. The Philadelphia Council AFL-CIO’s unanimous endorsement of Councilman Henon sends a strong signal that Philadelphia’s working people will continue to have Bobby’s back, as we know he’ll continue to have ours.”

Henon is the longtime former political director for IBEW Local 98.

“I thank President Eiding and all voting members of the Philadelphia Council AFL-CIO for their unanimous endorsement today,” he said. “I know and value where I came from and will always have the labor movement’s best interests at heart. Whether it’s police officers, firefighters, nurses, teachers, sanitation workers, SEPTA drivers, union construction workers, office personnel, postal workers or any other union in this great labor city, I want them to know how much I appreciate them and that I will continue to give all I have to give to protect their jobs and their hard-earned rights.”

The general election is Tuesday, Nov. 5.

Congregations of Shaare Shamayim, 9768 Verree Road, will host a Meet the Candidates Brunch on Sunday, Oct. 27, at 10 a.m.

The Pennsylvania Coalition for Civil Justice Reform released its voter education guide for the two open seats on Superior Court. The guide, along with completed candidate questionnaires, is available to voters at http://www.paforciviljusticereform.org/pa-judicial-election-guide/.

Republicans Megan McCarthy King and Christylee Peck completed the surveys, while Democrats Dan McCaffery and Amanda Green-Hawkins have not.

Acting Secretary of State Kathy Boockvar is encouraging Pennsylvanians to submit requests for absentee ballots well before the Oct. 29 deadline.

State law requires applications for absentee ballots to be submitted no later than one week before Election Day. For this year’s Nov. 5 municipal election, the deadline falls on Tuesday, Oct. 29. Absentee voters must return their voted ballot to their county election office by Friday, Nov. 1.

This is the first election that Pennsylvania voters can apply online for an absentee ballot.

“The new online application is a great option that has already been embraced by thousands of voters,” Boockvar said. “We strongly urge Pennsylvanians planning to vote by absentee ballot to submit their application as soon as possible.”

Voted absentee ballots must be returned by mail or hand-delivered so that county elections offices receive the ballots by 5 p.m. on the Friday before the election. A timely postmark is not sufficient.

“By requesting absentee ballots and returning them well before the deadlines, voters can ensure that their votes will be fully counted and their voices heard,” Boockvar said. “We don’t want any eligible Pennsylvanian to miss the chance to cast their ballot.”

Deployed members of the military, Pennsylvania students attending out-of-state colleges or universities, individuals with illnesses or disabilities and individuals who will be away from their municipality on business on Election Day are eligible to vote by absentee ballot.

Absentee ballot applicants must supply basic voter registration information, specify a reason for applying to vote absentee and provide their driver’s license or PennDOT ID number. If they do not have a driver’s license or PennDOT ID, they must give the last four digits of their Social Security number. If a voter has neither, they must present a copy of an acceptable photo ID. A list of approved alternative types of identification is available at votesPA.com.

An absentee voter can designate an agent to deliver the absentee ballot application and completed ballot if he or she is physically unable to do so. Certification of Designated Agent forms are available online.