Since June, nearly 30 dogs have made the long trek from the Middle East to the National Greyhound Adoption Program in the Far Northeast.

Blacklisted by American greyhound tracks, NGAP has been looking elsewhere for dogs. The nonprofit accepted greyhounds from China after a large racetrack there shut down, and, mostly recently, they’ve been taking in dogs from Qatar and Oman.

In partnership with rescue organizations in those countries, NGAP has received podencos and salukis — which, like greyhounds, are considered sighthounds — as well as wadi dogs and several cats. Most were living in semi-feral conditions before being saved by rescuers.

David Wolf, NGAP’s director, said the organization began looking overseas after a referendum passed last year banning greyhound racing in Florida, which has a majority of the nation’s racetracks, at the end of 2020.

Since then, tracks have been sending retired dogs only to pro-racing adoption agencies, he said. NGAP is a vocal opponent of the industry and backed the ban.

“So, being at the top of the anti-racing group, we haven’t gotten dogs from Florida in basically a year now,” Wolf said. “Whether we will get any as it gets closer to shutdown time, we don’t know, so we’re looking for sighthounds in other places.”

Orr said NGAP has been working with several rescue organizations in the Middle East, including Omani Paws and Desert Hound Express Foundation. They’ve connected with the groups mainly through Facebook, Wolf said.

“It’s been a pretty neat process” being part of a “new international rescue community,” Orr said.

Getting the dogs to America can be challenging and expensive, Wolf said. Some rescues pay to have animals flown in; others subsidize the cost; and, sometimes, NGAP covers the travel expenses.

NGAP’s wadi dogs are young animals typically rescued off the streets of Oman’s capital, Muscat. Orr said they are family-friendly dogs, good with children, cats and other canines.

Salukis, which arrived at the center just a couple of weeks ago, are similar to greyhounds in body type. They were bred to hunt in the desert, and some have had their ears clipped to prevent them from flopping over their eyes during a hunt.

“Many of these dogs that are being rescued are coming from bad situations,” Wolf added.

Podencos are also used for hunting. Orr said they are intelligent dogs and problem solvers.

An ideal home for any of the breeds would have a fenced-in yard, Orr said, but, otherwise, the dogs possess a variety of personalities and activity levels.

“We’re kind of just learning about these new breeds, too,” she added.

The adoption program keeps the dogs in its kennels for a while to help them overcome their shyness. They also want to find out more about the dog so they can match them with a suitable owner.

NGAP began in 1989 in the Northeast and moved to its current location at 10901 Dutton Road more than a decade ago. However, the future of greyhound adoption is perhaps as uncertain as ever.

Last year, the program received 110 greyhounds after the Canidrome, a notorious Chinese racetrack, closed. Wolf said NGAP took a larger portion of dogs from the facility — 23 percent — than any other adoption center in the world.

As of last week, only one of the center’s Chinese greyhounds had yet to be adopted.

In the United States, greyhound racing is on a steep decline, Wolf said. After Florida’s ban goes into effect, there will be only a handful of tracks in the country, and a few of them are having financial difficulties, putting them at risk of closure, he said.

“Ultimately, all of the groups are going to have difficulty getting greyhounds because racing is going to end,” Wolf added.

Wolf said breeders have traditionally produced greyhounds only for racing, and they have cut back in recent years, too. Even if they do breed dogs as pets, it would likely carry a price tag too high for nonprofit adoption agencies to stomach.

“There’s a large number of people that love greyhounds, and they’re wonderful companions and pets,” Wolf said. “I don’t know what will happen in the future.”

It may mean more long plane rides for salukis, podencos and other sighthounds from the Middle East and beyond. •• 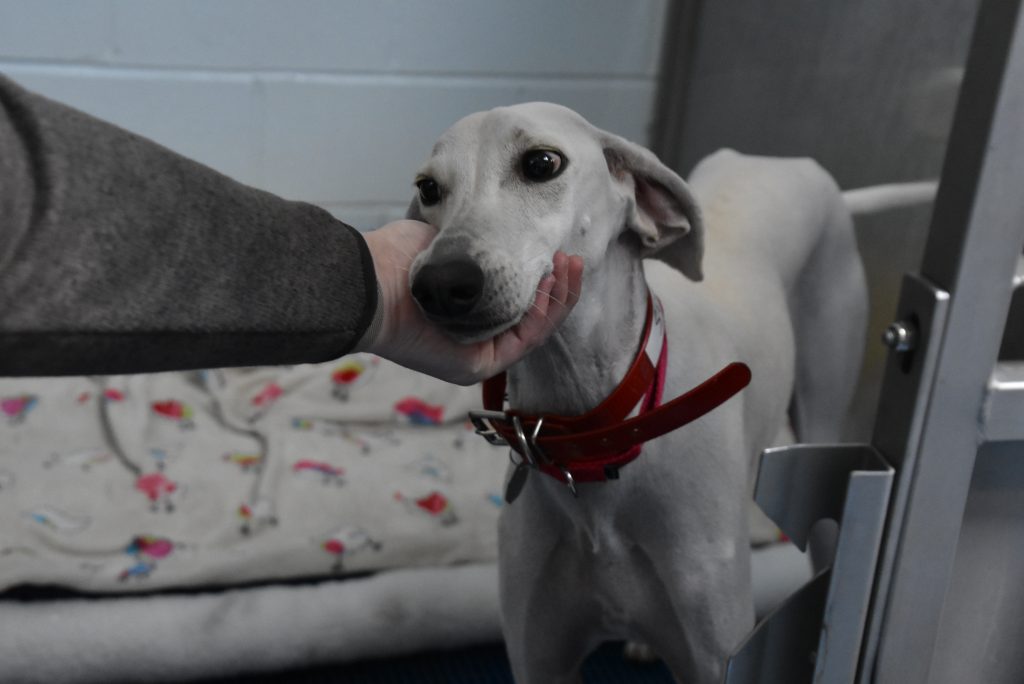