The discussion began with an 1852 quote from Frederick Douglass that reads, “What, to the American slave, is your 4th of July? I answer; a day that reveals to him, more than all other days in the year, the gross injustice and cruelty to which he is the constant victim… There is not a nation on the earth guilty of practices more shocking and bloody than are the people of the United States, at this very hour.”

Robbins said comprising the panel of educators was on purpose to understand the historical context of racial oppression in the country. The panelists discussed that at the time of the quote, oppressive systems existed across the country that prevented African Americans from obtaining freedom.

“It’s 2020 and I still say it’s not my holiday,” Muhammad said. “One of the things we want white America to recognize is that multiple perspectives exist, and far too often that is dismissed.”

Robbins recalled disagreeing with her mother about wanting to celebrate the holiday when she was growing up.

“My mother was born in 1939, and she was raised by her grandmother who was born in the late 1800s. The past had been so painful for my mother she couldn’t bring herself to express to me why she didn’t want to go down to the beach and celebrate,” she said.

The panelists also discussed the American flag after neighbors began hanging many of them around Fox Chase. Someone who identified as a veteran and hangs the flag outside his home every day asked how he should feel about it.

“As a black woman and a veteran of the U.S. Army, that’s our flag,” Robbins said. “My interpretation of the flag is a united country for all, and I firmly believe in my heart we can come together.”

Ridgeway said no one can tell a person how to feel about the flag and you have your own meaning to the flag.

“When Black people criticize the U.S., we immediately become anti-American,” Ridgeway said. “But white people are allowed to run around with a flag that symbolizes rebellion and treason, and that is the confederate flag, nobody blinks an eye. That is the height of hypocrisy.”

Members of NEAR gathered outside the FOP on Thursday during Vice President Mike Pence’s visit to voice their opinion of defunding the police.

“We denounce Pence’s affiliation with the FOP, Trump’s love of the FOP and the FOP’s love of Trump,” Robbins said.

In the future, NEAR plans to continue hosting discussions and events and communicate with elected officials. NEAR’s Facebook page can be found at https://www.facebook.com/groups/188346769168308/ or by searching Northeast Philadelphia Against Racism. The page is private and users must fill a survey to join. 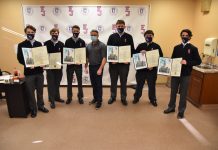