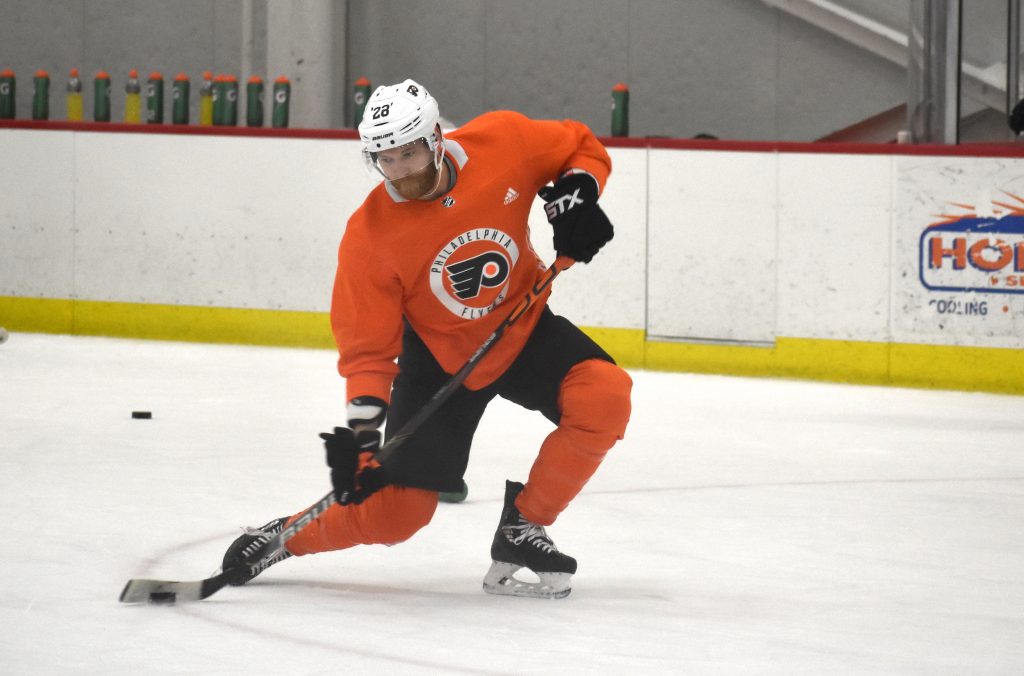 The captain of the hockey team gets the most eyeballs.

It’s a high-pressure position that so few get to experience and even fewer get to enjoy.

Claude Giroux took on that responsibility in championship-starved Philadelphia at the peak of his powers, coming off the 2012 season in which the Flyers defeated the Pittsburgh Penguins in an emotional, entertaining and high-scoring opening-round series.

Giroux’s performance in the clinching Game 6 was storybook stuff. He asked coach Peter Laviolette to start the game and immediately smashed Sidney Crosby to the ice within moments of puck drop. On the same shift, he picked off a pass at the Penguins’ blue line, and rifled a shot past Marc-Andre Fleury for the opening goal just 32 seconds in.

It was likely that moment, or somewhere in that series, that cemented the organization’s decision to make Giroux the next captain of the team when play resumed the following season.

Giroux’s regular season production has rarely been in question as one of the team’s and the league’s top accumulators in points over the next eight seasons.

A 22nd-overall draft pick clearly punched above his weight, as his 572 points over 604 regular season games as captain proves he was really good for a really long time. Organizations play top dollar for production like that, and the Flyers have gotten their money’s worth, but mostly between October and April.

For whatever reason, the playoffs have not been as friendly.

The Flyers missed the postseason in Giroux’s first year of captaincy in 2013 during a lockout-shortened season. Upon re-entry, his playoff numbers have been downright scary, and not in a good way.

In 32 career playoff games as the Flyers captain, Giroux has scored just three goals, including one empty-netter. He has one goal in his last 26 playoff appearances and none in 13 games this year, despite continuing to play alongside the best players and being given the best opportunities to score.

The frustrated rumblings of the Flyers’ fanbase have grown increasingly louder this postseason, but fans probably should stop waiting for the white horse to arrive.

You can shake off some past disappointments, like in 2018, when his 102-point season single-handedly lugged the team into the playoffs with a late-season run before running out of gas against the superior Penguins.

This time, there was no excuse.

Incredibly rare circumstances gave the Flyers and Giroux months of full rest before beginning the playoffs as one of the favorites in the Eastern Conference.

They struggled against the 12-seeded Montreal Canadiens and they now face elimination against the 7-seed New York Islanders, who have largely outplayed them the majority of the series. And the captain has zero goals and five assists to show for his time in the bubble in Toronto.

Giroux is still a good player, but he is no longer elite. The proof was evident in Game 4 on  Sunday night against the Islanders, as Giroux gave his best effort of the postseason in a pivotal game. The captain fired five shots on goal, which represented the most he’s had in a playoff game in his last 28 appearances. He even went to the dirty areas a few times and put a dangerous diving rebound chance into Thomas Greiss’ pads. He finished the game with zero points, and the Flyers lost the game 3-2.

The effort was there, but the problem lies much deeper.

Giroux is on the wrong side of 30, and he’ll be 33 in January, when the next season figures to start. And the Flyers are wrong for depending on Giroux to still be the offensive savior of this team.

He no longer has the foot speed to create difference-making plays on the rush by slicing through the neutral zone and dangling the puck between a defender’s legs. He can’t continue to expect to score from the top of the circle, as the power play has become predictable. And that’s not totally his fault.

The Flyers lack scoring threats on their first unit, relying on plays that require several passes to execute through heavily guarded areas.

They don’t have a dangerous stickhandler (see Mat Barzal) who backs defenders off.

They don’t have a cannon (see Shea Weber) who draws special coverage while opening up others. And they certainly don’t have guys with the ability to fish out pucks in corners when the only zone-entry option is a dump-in.

You can look at the Tampa Bay Lightning, as their 30-year-old captain and former 60-goal scorer Steven Stamkos has yet to play a game this postseason and yet his team was closing in on the Eastern Conference final with a commanding lead on the President’s Trophy-winning Boston Bruins.

The Lightning don’t need to rely on their captain, and neither should the Flyers.