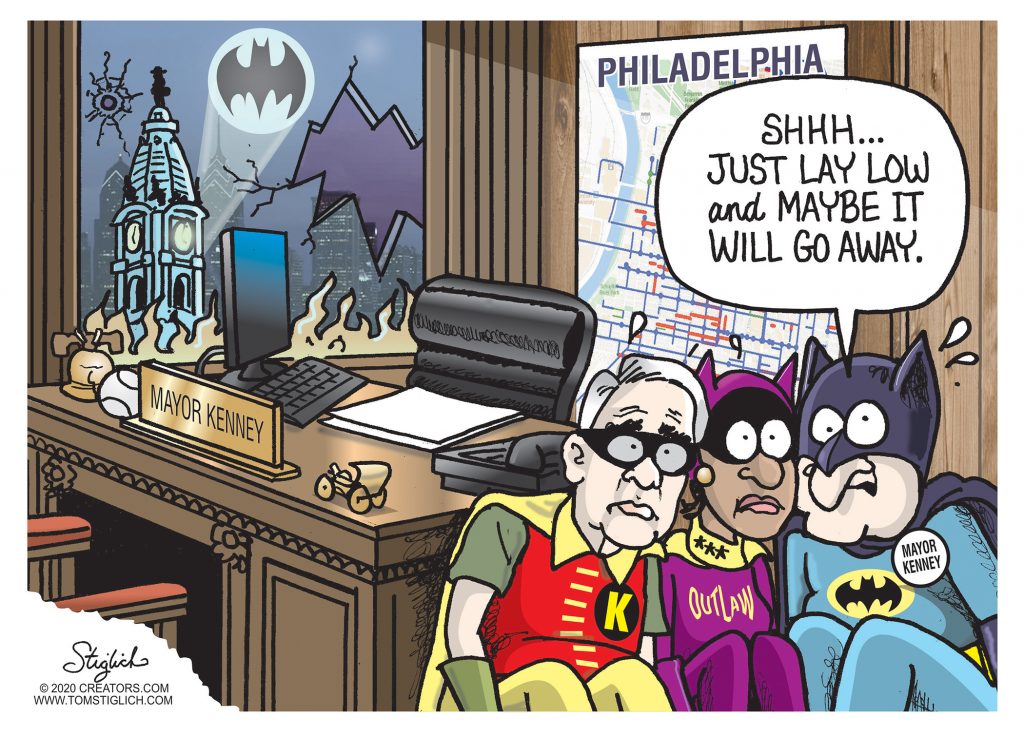 Wallace was not walking like he was taking a stroll in the park. His behavior was wild and erratic. He was wielding the knife, not casually walking.

The police response was horrendous, again. Its policy of hands off creates a concept we can do anything we want, and they do. Between Kenney and Outlaw, I don’t think there is an active brain cell. Their policies will continue to keep this city as the poorest in the country. Looting and rioting cause job losses and business closures. It also will cause retail deserts in these areas of the city. The city is becoming the next Detroit. Between City Council’s anti-business laws and upper management’s hands-off-the-crime policy, the city is doomed.

There is an amendment to a transportation bill working its way through Harrisburg, introduced by state Sen. John Sabatina (D-5th dist.), that would throw a wrench into the Registered Community Organization process.

The amendment in question is one that would require RCOs to formally approve bike lanes before they could be installed by the City of Philadelphia. The intention of the amendment is to provide more community input for these traffic safety tools.

As the heads of RCOs in the 5th District, we are united in believing that our senator’s amendment would have the opposite effect of its intention.

We oppose it because of the degree that it would increase our legal exposure. Any RCO in Philadelphia can tell you about the legal risks RCOs — which consist of volunteers — are already exposed to.

Forcing our organizations to exercise veto power over a traffic safety device would, at the very least, increase our insurance premiums immediately and, at the most, jeopardize our organizations’ existence and put our board directors at risk. RCOs were created for an advisory role, not for veto power. Such power is delegated to city councilmembers.

Changing our organizations’ definitions and authority is a conversation and process that should involve more thought than a little-publicized amendment to a transportation bill in the state Senate.

We urge Sen. Sabatina to rethink his amendment and propose one instead that maintains the role of RCOs in the city’s civic engagement process, and to convene residents and provide them with the opportunity to comment on projects as they are being planned.

Do your job, Larry

Philadelphia Police had to defend citizens and themselves from an individual who refused to drop a knife. That individual had several arrests for assaults, resisting police and other crimes for the last seven years.

He even had an open case due for trial and was out on the street.

If the DA did his job properly, that guy would have been alive and in jail where he belonged.

Krasner has to go.

Yo, is Rocky safe?

It’s no doubt that the times are changing. And with that, people change as well. The issue is not based on the racist unfortunate behavior of the past. Rather, it really is not about the future, either. It really comes down to the next breath we all so freely breathe. So, why taint the moment? Is living and getting along with one another that distant that we have succumbed to destroying famous, historical statues (like them or not). The rioters and looters attack Mayor Frank Rizzo, Flyers voice Kate Smith, still waiting for a looter to assault Rocky Balboa. So, rather than dwelling on the past and its many poor decisions, how about enjoy the moment you are breathing.

Lately, violence and looting have become a way of settling differences. People who become part of such groups seem to forget about those who need to work. Also, as to whether or not the owners would even reopen. What has happened to the idealization of “Peace on Earth, good will toward man?” Obviously, this may be just a saying. But is it worth time in jail. losing a job, bringing shame to a family? Such people must put a stop to the violence. Express their anger by showing respect and honoring those who were victims of an injustice.

I am writing in response to the article in the Oct. 28 paper on the COVID-19 Unit at Chapel Manor nursing home. They may be proud of providing care for positive COVID patients, but what is not addressed is the relocation of longtime residents in order to make the unit possible. My mother was one of those residents. She is 89 years old and has severe dementia. Chapel Manor was her home and the only place she wanted to be. In less than 24 hours, she was packed up and moved to a place she doesn’t know. I was told by Chapel Manor that they were sorry but had no control because the City of Philadelphia and the Department of Health were taking over. I was also told that the families would be given a letter explaining the situation but it’s been three weeks and I still haven’t received it. I first contacted the Northeast Times the day after my mother was moved because of the lack of information from Chapel Manor, the City of Philadelphia and the Department of Health. I thought the paper may have heard something about the unit and, if not, they would be interested. I also thought the people living around Chapel Manor deserve to know that a unit for COVID-positive patients was in their neighborhood. Though a unit like this is a reality in today’s world, we need to treat residents like my mother with the same compassion and respect as we do the people suffering from COVID. This did not happen for my mother. For the record, my mother tested positive for COVID in early April. My mother is safe and adjusting at her new home. She will never return to Chapel Manor after how they handled this situation so poorly. Their longtime residents deserved better.

As someone who was at the recent Greater Bustleton Civic League town meeting regarding the Red Lion Rd UPS project, I wanted to make people aware of the ongoing duplicity by the development company (CDC), UPS and the city of Philadelphia. Both CDC and UPS denied any subsidies were being provided by local or state governments. However, the site is in a city and state Keystone Opportunity Zone, meaning UPS qualifies for state and local income and business tax exemptions. Also, Gov. Tom Wolf promised $9 million in state funds to UPS. This includes $2.7 million in Job Creation Tax Credits dependent on creation of new jobs, $5.6 million in Infrastructure and Facilities Improvement Program funding and $659,400 in grants for training and development.

Despite assurances they would be required, UPS is being excused from zoning variances or waivers for this site.

The original assertion of over 1,200 jobs has been scaled down to 300-400, the rest being a mix of part-time and student internships.

The serious deficiencies regarding remediation of PCB toxicity and the egregious traffic issues are items of which everyone involved is already aware.

Councilman O’Neill has known about plans regarding this project for over a year, but has behaved like he knows nothing about it. Under councilmanic prerogative, he has the power to block this project and accede to his constituents’ concerns regarding degradation of quality-of-life issues. Instead, he has done nothing.

There is no reason to believe continuing only our current activities will provide the desired outcome. It is time to learn from those participating in more rigorous media campaigning and public demonstrations.

Serious thought must be given to more active measures to protect our neighborhood.

Where are our public servants?

For at least 2½ years a gigantic project, the details of which have been very deliberately kept secret from the residents, businesses and local civic organizations in the Far Northeast and Lower Moreland, has been underway. A 1.06 million-square-foot warehouse (that’s about the size of Citizens Bank Park) is being planned in the center of three residential neighborhoods.  This is a package distribution warehouse to be operated by UPS.

On Sept. 8 the plan went in front of the city Civic Design Review board, as required. The owners’ and UPS’ presentation consisted of many gross inaccuracies. Among these inaccuracies was their traffic projection. They told the CDR board there would be 5,000 trucks per day. An independent traffic engineer’s opinion, judging by the size and usage of the warehouse, puts the number closer to between two and three times that many (or seven to 10 trucks per minute, 24 hours per day).

The site is at One Red Lion Road, where the old Budd manufacturing company once was. When that facility was built, the area was farmland and forests hence the industrial zoning and the current problem.

Now the area has evolved into residential neighborhoods but the outdated zoning has remained and is being abused by UPS (and our city politicians) in complete disregard for the people, homes, apartments and nearby schools and businesses.

Ever since the residents found out about this nightmare through their local community organizations, there has been opposition to it. Our city politicians did not even admit to any knowledge of it and in so doing have refused to help us save our home area from this pedestrian endangering, traffic, pollution and noise-generating behemoth.

This will not be a great jobs bonanza, either. These will be $10-$17-per-hour jobs, and the workplace will be highly automated. The local residents and community organizations do not oppose development of this site but nothing about this particular usage fits the area. The roads and intersections that access the location already have heavy traffic, and where will the tractor trailers park and wait for their arrival slot?

All of UPS’ other sorting and distribution centers are in rural areas and it is hard to imagine that anyone, with any sense, from UPS has ever seen this location. Due to the limited access, its own efficiency is bound to suffer, and UPS will certainly incur the acrimony of its new neighbors forevermore.