Games and practice might be off limits, but that doesn’t mean they couldn’t win together as a team.

That was the attitude of the St. Hubert High School softball team this weekend. Like all softball teams, the Bambies didn’t get a chance to play last year because of coronavirus, and this year, most of the workouts have been canceled for the same reason.

So on Saturday, the team got together. And they made it their mission to let first responders know that they’re appreciated.

“This is a time where we’re truly getting ready for the workouts when it’s not the pandemic, so I was thinking of something to do,” said Dan Milio, who was named head coach last year, but has yet to coach his first game because the season was nixed. “Everything is going on. I wanted to do something as a team where we could get together and do something positive.”

The team bought eight pizzas from Montessini’s in Mayfair, as well as water, cookies and sticky buns from Fritz’s Bakery and delivered them to the 15th District. They also picked up pretzels and baked goods and took them to Philadelphia Fire Department- Engine-36 Ladder-20 Medic-17 on Frankford Avenue.

“I thought it was important to do something as a team. And to show, police officers get frowned upon at times, they’re appreciated and we respect what they do. It’s not an easy job. Not everybody thinks negatively about them. We wanted to do something for the people who give up their lives for us.”

It meant a lot for all of the girls, which included about 10 members of this year’s team, as well as some eighth-graders who are headed to the school.

But it might have meant the most for senior captain Emily Murphy.

Murphy, who was the first baseman on the Bambies team that won the Catholic League championship in 2019, is slated to be the pitcher on this year’s team. Her father, John, is an officer in the 15th District.

After Milio came up with the idea, she jumped on board and helped with the planning. She had a lot of reasons for wanting to take part in the community service.

“It felt really good to be back with the team because we haven’t done much, we haven’t worked out together in a while and we don’t see each other as often,” said Murphy, who was slated to be a captain last year. “Last year we didn’t have a season, and I was the only captain who wasn’t a senior, so we organized a drive-by and gave them little presents. It’s good, since we’re not playing, that we get together and do fun things.”

“I talked to my dad and they were all very grateful for it,” she said. “It was really nice to see the looks of the faces of the cops and the firemen. They really seemed to like it, so it was nice for them, and it was nice for us.”

Both departments appreciated the goodies, but it meant more to them that people cared enough to pay them a visit and lift their spirits.

“It was great because all of the guys know Emily, but they didn’t know the other girls, so it was fun to see them together,” John Murphy said. “All of the guys are like uncles to Emily, so they were happy to see her, too.

“It was fun because Emily is a very quiet girl. But she helped with all this. It meant a lot because they were giving us the food, but as a dad, I was really proud.”

So was the coach.

“This was kind of my idea, I came up with it because of the time we’re living in,” Milio said. “But the girls really jumped on it and all wanted to help plan it and do it. It was great because we got together, and it was great because we had the younger kids there. It gives them an idea of what you’re going to do if you go to St. Hubert’s.

“This was the softball team, but I think it shows what the school is all about. St. Hubert’s is a great school with great girls. The school was 100 percent supportive of this idea. They just said we had to follow safety precautions. The school is great about that. And I think this shows what kind of girls go to the school.”

That’s the kind of person Emily Murphy strives to be, and she’s pretty successful.

She’s a star softball player, she’s ranked No. 7 in the school and next year she’ll play softball at Wilkes University, where she will enter the school’s pharmacy program.

At Ryan, hockey is a family affair 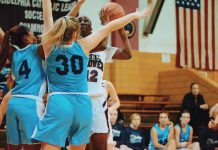 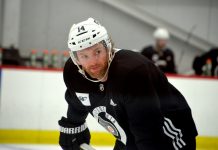