Emily Livewell has accomplished a lot by putting in hard work.

But on Saturday, when the St. Hubert High School senior was competing in the Philadelphia Catholic League cheerleading championships, she wasn’t shy about asking for help.

“I was talking to her every time I was tumbling or had to do something,” said Livewell, who lives in Somerton. “I talked to her every time on the mat. I’d say, ‘Come on Mom-Mom, help me here.’ I knew she was there with me the whole time. She was.”

Mom-Mom would be very proud.

Livewell was talking about her grandmother, who died earlier this school year after a two-week battle with coronavirus. She lived with her granddaughter before passing away. She wasn’t able to see any cheerleading this year, but in years past, she was at every one of the competitions.

“She got COVID and that was it, she wasn’t sick before,” Livewell said. “She lived with me so we were very, very close. She went to everything she could. I think she liked it because I did it, she was always supporting her grandkids. We loved her, and she loved us.”

Grandmom would have loved what she saw on Saturday.

Livewell helped the Bambies win the Catholic League championship, while earning All-Catholic, which is essentially the unofficial most valuable player award for cheerleading.

It was a great day for the Bambies, and Livewell couldn’t be happier about it.

“It was a rough year for us because we couldn’t practice during shutdowns, and for me personally, it’s been hard without my grandmom,” Livewell said. “So it was great to get good news. It was really good to win this as a team more than anything. Both were nice, but I’d always much rather win as a team because this is a team sport. If one person doesn’t do well, it impacts everyone. We won this together.”

But Livewell certainly did her part.

The way the All-Catholic award goes is, during the team’s routine, one judge watches the performer who is designated as an All-Catholic contender. Then a winner is selected at the end.

“You don’t really think about the pressure or anything because you’re working with your team,” Livewell said. “I just was doing what we always do. You practice it, you know what you’re doing. And I had my team there, they were doing it with me. It means a lot, but the team wins are why we do what we do. It was a little nerve wracking, but not bad.”

Livewell didn’t have an easy route to being the top cheerleader in the league.

Two years ago, while she was doing a routine, she suffered an injury that could have been a career ender. But she worked herself back to get into the sport she loves.

“I’ve been cheering since I was 5 years old, I love it,” Livewell said. “But sophomore year, I tore my ACL, so I was very discouraged. But I got my confidence back, and that really made it feel good to win today.

“I was doing a standing full, it’s a tumble where you twist and my leg hyperextended. It took a full year recovery. Cheerleading is hard, we always have people out with injuries, concussions, fractures, and this was a serious one.

“I just felt really discouraged that I wouldn’t be back to my normal self. I take it really seriously, and it crossed my mind that I would never be the same. It was totally ruptured, and it was hard to come back, I had to do physical therapy. It wasn’t easy, but it was worth it. I was so happy to be back.”

That wasn’t a good injury, but it might have an impact on how Livewell spends the rest of her life.

Next year, the honor student will attend Temple University and she plans on continuing her cheerleading career.

“I loved going to physical therapy, I think I’m going to major in that in college,” Livewell said. “I really loved it. It was hard, but I liked going. I definitely think it helped me get better and get back to cheerleading.”

Temple proved to be the perfect situation for Livewell, who plans to commute.

She’s been in contact with the cheerleading coach, and she looks forward to showing her spirit to the Owls.

“They have tryouts, but because of COVID, I think they’re going to be virtual,” said Livewell, who was in Athletes Helping Athletes before the program was shut down, like everything else. “I like a lot of things about Temple. It’s a great school, I want to cheer there and I’m happy it’s really close. My family comes to a lot of my events and it’s only about 20 minutes away.

“I was lucky today because we were only given two tickets, but an underclassman gave two tickets to seniors, so I was able to have my mom, my dad, my cousin and my aunt come. Family is really important to me, we’re really close, so it was good they were able to come.”

They’ll also be cheering her on later this year when the Bambies compete at nationals. They aren’t headed to Disney World, but the only thing that matters is they have another chance to cheer together.

“We’ll be competing virtually this year, so that will be different, but we just want to keep working together,” Livewell said. “Usually we’d be done now and the younger girls would be getting ready to start open gyms in April, but this year everything is pushed back. So that’s good. I want to be around this team, we’re like a family.” 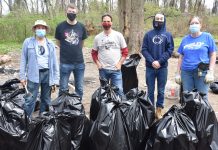