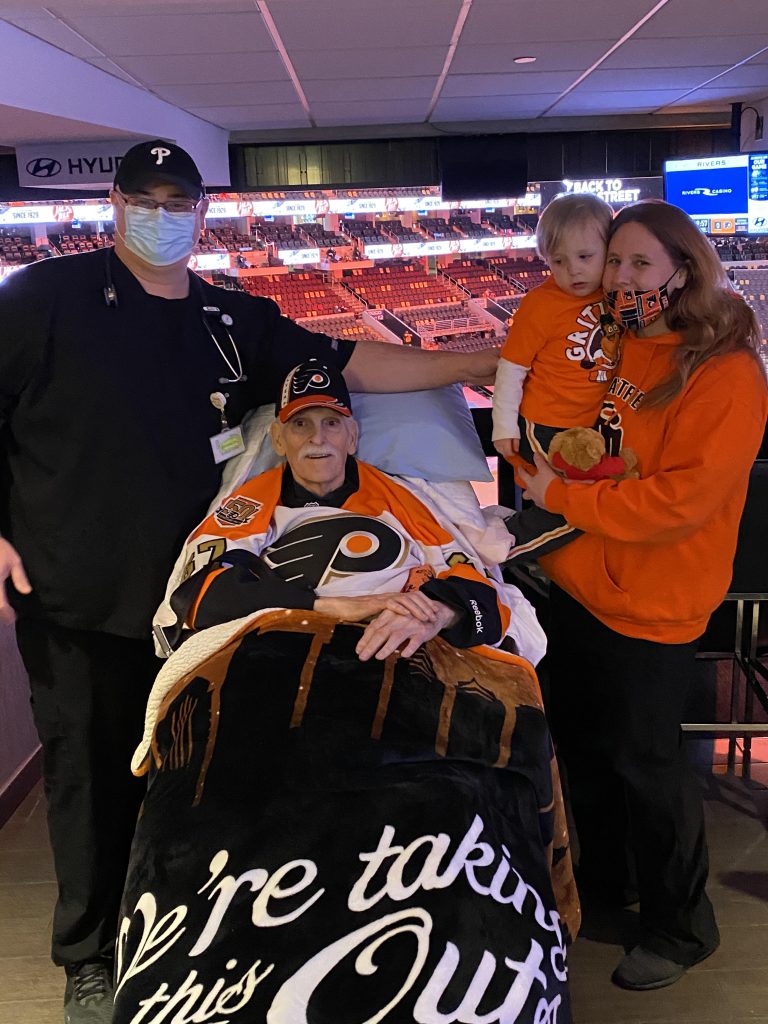 They were his lifeline.

Over the years, the Broad Street Bullies gave Thompson, who died March 24 at age 78, priceless memories. He attended over 50 home openers, watched a game from late owner Ed Snider’s private box, and almost had his front teeth knocked out by a rogue puck (and refused medical attention with only four minutes left).

But above all, the Flyers brought Thompson closer to his family, particularly his baker’s dozen of grandchildren. It became a tradition for him to take each one to their first hockey game, passing on his passion to the next generation.

However, after 12 got the privilege of heading to South Philly with Thompson, it seemed the 13th grandkid, 3-year-old Isaac, might not get that chance.

In July, Thompson, who always struggled with heart issues, underwent LVAD surgery. He lost strength in his legs and was bed-ridden.

In November, around Thanksgiving, Thompson’s family brought him home. Diagnosed with end-stage heart failure, they wanted him to be comfortable and safe from COVID-19. With doctors unable to provide any answers, there wasn’t much hope. That is, until his wife Beverly heard fans would be welcomed back inside the Wells Fargo Center for the Flyers’ game against the Washington Capitals on March 7.

She needed to get her husband there. He needed one last memory with his last grandchild.

After countless phone calls to anyone she could reach at the organization, Beverly got the news she – and the whole family – needed. They were welcome to bring Thompson to the game, where he’d have a private suite for his stretcher.

“He was very weak and withdrawn and could hardly talk for three days on Monday, Tuesday and Wednesday. And Thursday when we told him, I never saw his demeanor like that. He was just like a different person. He needed something to hope for,” said Beverly.

An ambulance company and Thompson’s nurse/case manager Nick Teti, from Abramson Hospice (part of Abramson Senior Care), were with him throughout the day. Teti, who pursued a healthcare career after 16 years as a manager at Lowe’s, was thrilled to be part of the adventure.

“With me coming into nursing at a later stage and coming into hospice in my late 30s, I see things a little different than the average person,” he said. “With all of my patients, if they were ever able to do something that was on their mind or on a list that they felt they needed to do in their lifetime, then I’ve always been supportive.” 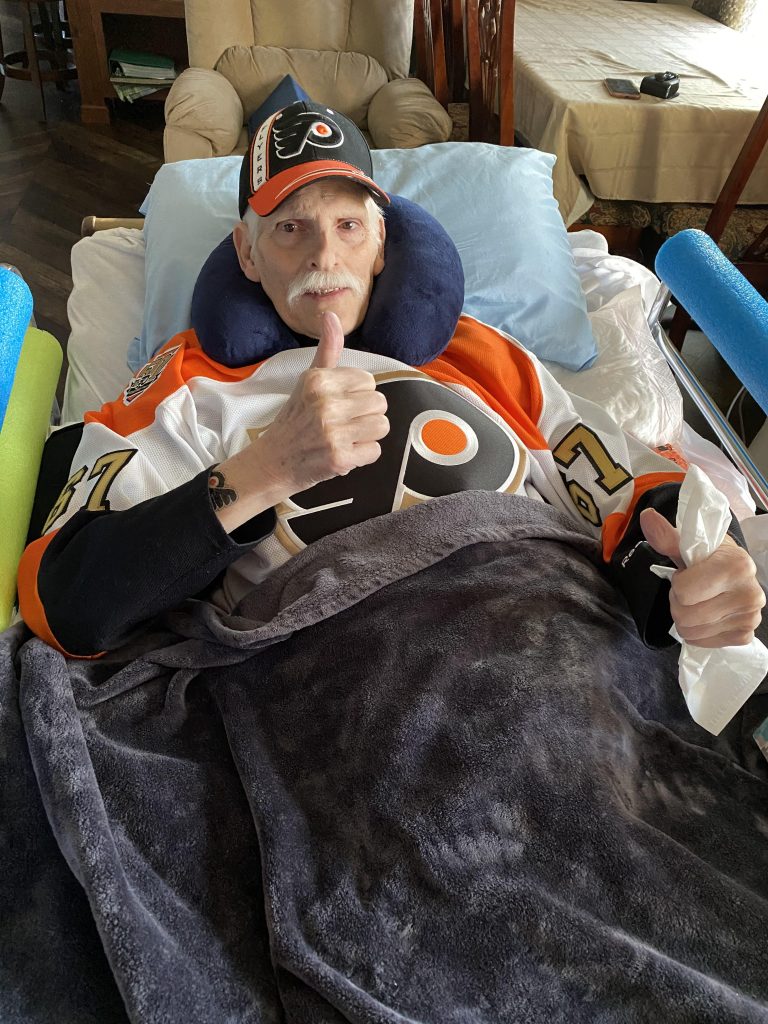 Due to the logistics of the trip (the almost hour-long journey, Thompson’s frail state), Teti was a little on edge at first. Thankfully, everything went smoothly and his patient had the time of his life.

“He smiled from the time he got in the ambulance until probably somewhere in the second period when they started to lose,” said Teti with a laugh. “When we do the thing that we love most, and we do it for the last time, we don’t always know that it’s our last time. And I think that’s even more special for people like Russ. He knew that this was most likely his last game, so he absorbed it all.”

Thompson even enjoyed a few bites of his favorite stadium snack – a Philly cheesesteak.

“As a nurse, when you know your patient hasn’t really been eating at all, and most of the things he’s been attempting have been broth, liquids or apple sauce and he hasn’t really been doing well with them, to hear him go, ‘I could really go for a cheesesteak,’ my heart dropped into my stomach,” said Teti, who stood behind Thompson “like a hawk” as he munched.

Though Isaac was too young to fully grasp the significance of the game, he had fun running around and playing on the furniture in the club box. The only downside was that he didn’t get to meet Gritty.

Present at the game was Beverly’s daughter Judy, who also has fond Flyers memories. After Beverly’s first husband passed away and she met Thompson, he became like a father to her children. When it was suggested that Judy, age 12 at the time, go to a game with her mom’s new boyfriend, she was not on board. Years later, Beverly discovered Judy told her friends at school that she went to the city “with a strange man.”

“But from that day on, she fell in love with it. She loved it. Now she’s his hockey buddy,” said Beverly. “It was very hard on the family to see him deteriorate. Knowing he could go to one more hockey game and take his grandson was just a miracle.”

Beverly praised her friends, neighbors, church and Abramson for helping to make everything possible. The atmosphere of the stadium – the smell of the ice, the roar of the crowd – gave everyone a newfound sense of positivity.

“You have to enjoy. If we’re gonna go, we’re gonna go making memories with our family and kids,” said Beverly. “We’ve chosen faith over fear.” ••