Growing up in a corner rowhouse with no yard in Lawncrest, Christine Cook always enjoyed drives out to Hershey to visit her older brother Tom on weekends. Tom was a student at Milton Hershey School, and Cook remembers marveling at the fields, animals and full-sized gym the school had when she was just 6 years old.

Milton Hershey was a boys-only school at the time with the mission of creating a home for orphaned boys. Cook’s father passed away when she was 4 years old, leaving her mother to raise four kids by herself. Secretly wishing she could join her brother at the school, Cook’s wish came true when the school opened its doors to female high school students when she was 15 years old.

She seized the chance, spending her final years of high school learning there and graduating among the school’s first-ever wave of female graduates in 1981. She said she wears the accomplishment with a badge of honor, but also remains humble.

“I wish it was because of something I did rather than my name being high in the alphabet,” she said.

Still, her accomplishment helped pave the way for female students to follow her, and today it’s 2,000+ student body is divided evenly between boys and girls, according to its website.

After she graduated, the school helped fund her continued education at West Chester University with a degree in early childhood education, and she went on to earn two master’s degrees from Millersville and Duquesne universities. She knew she wanted to be a teacher because of her love for children, but she didn’t quite know where she’d end up teaching.

But, just like in high school, there was some sort of pull that brought her back to Milton Hershey. Cook has taught kindergarten at Milton Hershey for 35 years, though she never consciously knew she wanted to return until it happened.

“The way the pieces fell into place, it was like it was meant to be,” she said.

Cook is known as an energetic and committed teacher, bringing a piece of her Northeast Philadelphia roots with her with her love of Philadelphia sports that she imparts on the kids. It’s no surprise then, that after her long career, she earned honor of being named the 2021 Alumna of the Year.

“Winning the lottery would be great, but this is better,” she said, still emotional from the news.

Cook is a common name around the school. Her daughter Jennifer followed her to Milton Hershey, teaching fourth grade and coaching the high school volleyball team, and her younger daughter Megan is a practicum student with Psychological Services at the school while she studies for her Ph.D. When she started as a teacher, her daughters would come help her set up her classroom, visiting the campus for most of their lives despite never being students themselves.

Being named alumna of the year is a bittersweet ending to her career, as she announced she will retire at the end of the school year. Her husband Ken, who was also employed by Milton Hershey School, battled cancer for two years before passing away, and she realized “life is too short” to put off the things she wants to do.

Though she’ll be leaving as a teacher, this is far from the last time the school will see her. She expects she’ll return to help her daughter set up her classroom, just like Jennifer helped her. 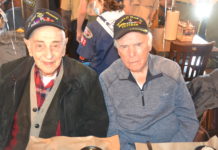