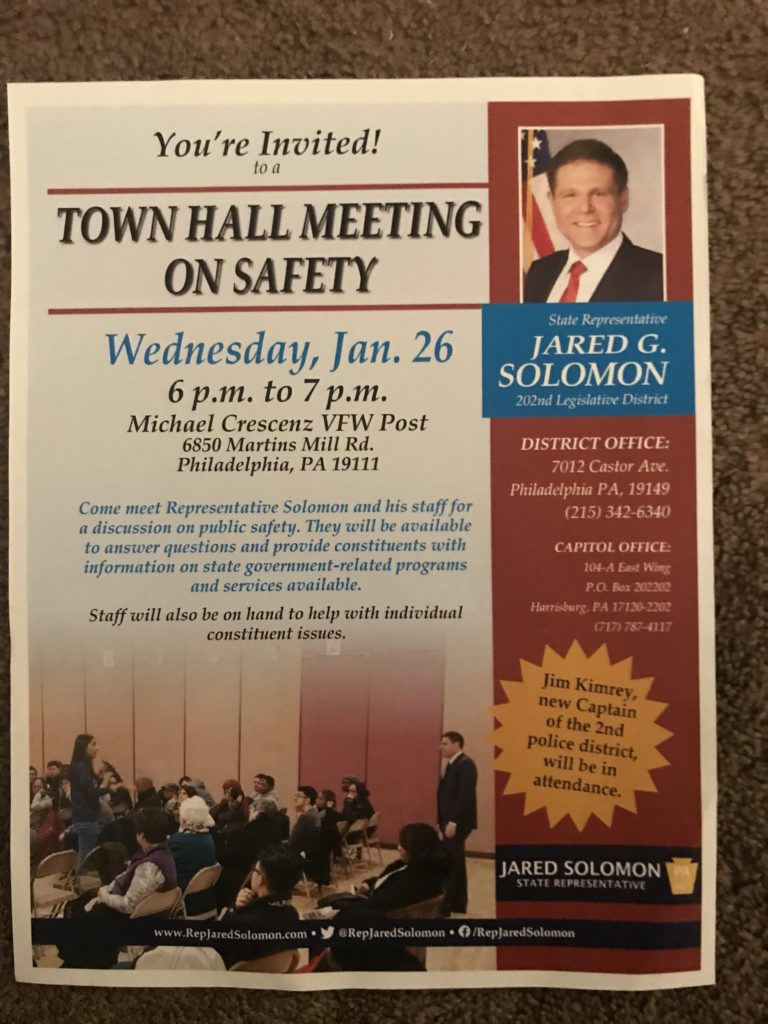 Mroz spoke of a murder on the 500 block of Rosalie St. and the killing of a pregnant woman and her unborn baby on the 6100 block of Palmetto St. Gun violence and carjackings are on the rise, and the officer urged people to lock their car doors.

On a brighter note, Mroz said arrests are being made and illegal guns recovered.

Anonymous crime tips can be submitted at 215-686-TIPS or tips@phillypolice.com.

In other news from the Jan. 20 meeting:

• Members unanimously approved a bid by Lawndale Baptist Church, 6433 Lawndale Ave. [at Martins Mill Road], to erect an illuminated sign that will be on display daily from 9 a.m. to 9 p.m. The proposal is also supported by neighbors of the church, the Philadelphia Protestant Home and Cedar Grove Christian Academy.

In other zoning news, Club Krush, 6414 Rising Sun Ave., is seeking a special assembly license to be able to have a DJ. A ZBA hearing will take place March 9. A club representative will be at next month’s meeting.

There is a proposed day care for up to 12 kids at 555 Van Kirk Street [at Palmetto Street].

• State Rep. Jared Solomon addressed the crowd. He will be holding a town hall meeting on safety on Wednesday, Jan. 26, from 6 to 7 p.m. at Michael Crescenz VFW Post, 6850 Martins Mill Road. Guests will include Kimrey, the 2nd Police District commander.

• Bee’s Tiny Market, 600 Brill St., invites the public to its grand opening on Saturday, Jan. 29, at 10 a.m. There will be cupcakes, a ribbon cutting and games at checkout.