The Cardinal Dougherty Soccer Hall of Fame is back.

After a few years off due to the pandemic, the committee announced its class of 2022 earlier this summer during the annual alumni game, which is played during the Cardinal Dougherty High School all-class reunion in North Wildwood.

This year marks the sixth installment of the hall of fame, and the committee made some great selections.

Here’s a look at this year’s inductees.

A four-year varsity player and three-year starter, Channel was twice named First-Team All-Catholic and was named All-Scholastic during his senior season.

Channel helped the Cardinals win a Catholic League championship during his junior and senior years, and in his senior year, Dougherty won the city championship.

After leaving Dougherty, Channel played four years at the University of Pennsylvania.

A three-year varsity player and two-year starter at Dougherty, Hudoka enjoyed his finest season during his senior year. That year, while leading the Cardinals to the Catholic League championship, he was a First-Team All-Catholic and an All-Scholastic Team selection.

He also excelled after leaving Dougherty, but in a different sport. He spent four seasons as the varsity kicker at Delaware Valley College in Doylestown.

The second-leading goal scorer in Cardinal Dougherty history was a star as an underclassmen, earning First-Team All-Catholic during her sophomore, junior and senior seasons. Her senior year was one to remember. Kelly, a team captain, was the MVP of the Catholic League, was a Philadelphia Old Timers selection and was named the school’s athlete of the year in 1985.

She went on to start two years at St. Joseph’s University.

In 1979, Kogut was First-Team All-Catholic, All-Scholastic, a team captain and a Philadelphia Old Timers selection. He was also the MVP of the Keystone State Games in 1980.

The final boys soccer coach and athletic director at Dougherty enjoyed a lot of success as a Cardinal. He was a three-year starter and was named All-Catholic during his junior and senior seasons. In his senior year, he was a team captain and won the Bob Hughes Award at Dougherty.

He went on to star at Cabrini College, where he was a four-year starter and the MVP of the PAC championship as a freshman. He led Cabrini to the championship during his first two years at the school, and in 1997, was named team captain.

Wilkinson made the most out of his two years as a starter, particularly during his senior year when he was First-Team All-Catholic, First-Team All-Scholastic and helped the Cardinals win the Catholic League championship.

He then went on to play four years at La Salle College.

He’s continued to give back to the game. He coached at Community College of Philadelphia from 1988 to 1992, and after exiting coaching, he became a PIAA official, a job he continues to this day.

A three-year varsity player, Winters was All-Catholic three times, including his senior campaign when he was a first-team selection. His finest year was his final year, where he was team captain, team most valuable player, an All-Scholastic selection and an Old Timers selection.

As good as he was at Dougherty, he may have been better at Cabrini, where he was a four-year varsity player.

He made PAC All-Conference during his final three years, and was a two-year captain and team MVP. In 1996 and 1997, he was named the Cabrini College Male Athlete of the Year.

For details on the banquet, or to buy tickets in the fall, visit the Cardinal Dougherty Soccer Alumni Facebook page. 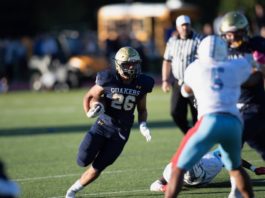