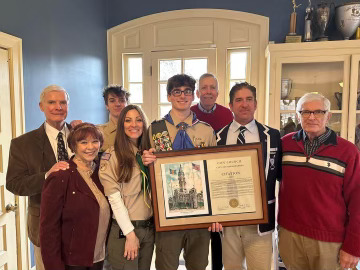 Kyle L. Connor, of Boy Scout Troop 18, recently had his Court of Honor to celebrate completion of his Eagle Scout project.

The event took place at the Fairmount Boat Club on Boathouse Row.

Connor, of Bergen Street in Fox Chase, is the son of Jeanie and Larry Connor. He is a 2022 graduate of La Salle High School and is studying nursing at DeSales University. His brother, Liam, 16, a junior at La Salle, is assistant senior patrol leader at Troop 18.

Connor was Troop 18’s senior patrol leader from February 2020 to July 2021. He’s been an altar server and a member of the World Affairs Club and played baseball and rugby.

His Eagle Scout project was to repaint and refurbish all the baseball benches and clean the coaches room at Fox-Rok Athletic Association. He played soccer at Fox-Rok as a youngster and baseball until he was 17. ••