It was a case of 7,000 missing insects, but where they went – and who took them – was never the question.

When the vast majority of creatures living at the Philadelphia Insectarium and Butterfly Pavilion in Holmesburg were nabbed last fall after a disagreement with employees, CEO John Cambridge had little hope of ever seeing the little buggers again. About 5 percent of the stolen creatures returned home after police became involved, but a good portion of the stolen biodiverse life likely ended up being traded on the black market, Cambridge said.

The investigation remains open and is being handled by federal investigators, but the who, where and why are largely known. Former employees staged a coup at the Insectarium and stole most of the creatures by simply carrying their cages through the back door.

So, on to the real question – why would someone steal 7,000 insects to sell? And, more importantly – who would buy them?

There are a lot of interested customers out there, according to Ben Feldman. Enough for there to be an active black market for illicit bug trade with international laws in place to monitor such creepy-crawly transactions.

The psychology behind why people wish to purchase such creatures – considered gross by many – is the focus of Feldman’s upcoming documentary The Flea Market, which will examine the “buglary” at the Insectarium and the role it played in the larger black market.

“We want to examine the human behavior behind the bug trade,” said Feldman, working with Asta Entertainment LLC to release the film.

“If you collect plastic cars, that’s not my thing, but OK I get it,” he said. “When someone collects millipedes, which are fairly revolting to most people and also extremely dangerous, that brings the whole other question of why someone would want to collect that thing and have it.”

The documentary will delve into the regulations set in place for international bug trade and feature interviews with collectors themselves.

“The primary explanation I’ve been hearing is people want to own exotic things they are not supposed to have,” Feldman said. “People like having endangered species or dangerous animals as pets, and the same is true in exotic insect trade.”

The goal is to wrap up production on the film in the near future, dependent on when certain court rulings related to bug trade are found. A fall 2019 release date is tentatively planned, with the hope being that the documentary will be screened at many festivals and eventually optioned for a streaming service.

A teaser for the doc can be viewed at FleaMarketMovie.com.

The “buglary” incident began last fall when an Insectarium employee overheard they were about to be let go due to poor job performance. They were able to gather several other employees to help them with the heist. The investigation has been turned over to federal authorities as some of the stolen creatures were being held as federal evidence in illegal bug trades. •• 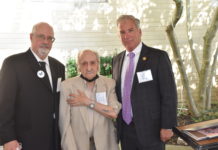