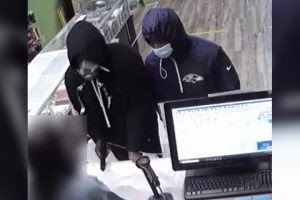 The males walked in and approached the counter. One suspect brandished a black handgun and told the employee to give them all the phones. The suspects began grabbing phones from inside the counter and placing them in a plastic bag. The suspects fled. A witness followed the suspects and observed them get into a green older-model Chevy Trailblazer. Taken was an unknown number of phones.

If you see the suspects, do not approach. Call 911.

All tips will be confidential.

To submit a tip, call 215-MU6-TIPS, text to PPD TIP or go to http://www.phillypolice.com/forms/submit-a-tip/.

One dead, six injured in shooting near Frankford Hospital