There were 81 thefts, which targeted 54 businesses, 20 vehicles (including two stolen vehicle tags), five street thefts, a private residence and a nursing/retirement home. Ten arrests were made.

There were three robberies. William Garrett, 35, was arrested Jan. 29 following the robbery of a chain store at 10700 Haldeman Ave. Other robberies happened on the street at 2300 Woodward St. with a handgun (Jan. 30) and a cargo vehicle being hijacked at 8300 Dorcas St. (Jan. 24).

Javon Avery, 25, was arrested Jan. 20 following an assault with no weapon at an apartment house at 1700 Tomlinson Road. The only other reported assault happened on a SEPTA bus/trolley at 11600 Bustleton Ave. on Jan. 29 and involved a knife.

The only reported burglary took place at a gas station at 10000 Verree Road on Jan. 23.

There were 49 thefts, which targeted 35 businesses, 10 vehicles (including a vehicle tag), two street thefts, an apartment house and a bicycle. Six arrests were made. In addition, there were no reported stolen or recovered vehicles..

The two reported robberies took place on the street at 2800 Walnut Hill St. with a handgun (Jan. 25) and at a vehicle parked at the intersection of Roosevelt Boulevard and Grant Avenue with no weapon (Jan. 19).

There were 50 thefts, which targeted 23 vehicles (including a stolen car phone and four stolen vehicle tags), 21 businesses, four street thefts (including a pickpocketing), a bank and a doctor’s office. Three arrests were made.

There were 91 thefts, which targeted 45 vehicles (including 14 stolen vehicle tags), 21 businesses, 17 street thefts (including two purse snatchings), seven private residences and an apartment house. Four arrests were made. 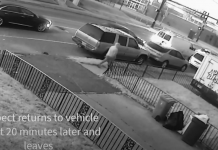