Everyone knew what they’d be defensively.

But offensively was the question mark.

The Archbishop Ryan High School boys soccer team returned its entire defense this year from a team that went undefeated in the Catholic League last year and won a game in the state tournament. It was figured that goals would be hard to come by when playing the Raiders.

But would there be enough scoring?

The Raiders graduated Sidiki Fofana, who was one of the top playmakers in the Catholic League last year, and those goals would have to come from somewhere.

But they did return Timmy Cliggett, who started alongside Fofana up top last year.

Now a junior, Cliggett was a sponge last year, learning from his more experienced teammate and now he’s the guy leading the offense.

“With Sidiki being gone, I knew I’d have to step up and be a bigger part of the offense,” Cliggett said. “I like it a lot. It helps me and it helps my teammates. I play the ball and get it to them. It’s definitely a different role, last year I was scoring more and this year I’m getting more assists, so it’s different.

“Sidiki taught me a lot. I learned how to shoot and stuff like that. He could do some great things with the ball. He helped me with my finishing. Now I’m trying to help the other guys, the younger guys on the outside.”

Behind Cliggett, the Raiders are 3-2 in Catholic League play and are on their way to a memorable season. Last year couldn’t have been much better, but it was a different year. They didn’t play some of their Catholic League rivals, including La Salle and Father Judge, but this year things are back on track.

And Cliggett is happy with the way his team has started.

“The biggest difference is this year, we don’t have a guy like Sidiki who can do all the scoring, we all are doing it,” said Cliggett, who scored 10 goals last year, but has 15 assists thus far this season. “It’s definitely a different offense. We have way more people involved. It’s different scorers every day. It’s working.”

Cliggett might be the only returning striker on the Raiders, but he is working with a player he has plenty of experience playing with. Sean Scalen transferred in from Roman Catholic. He’s been playing with Cliggett for the past few seasons on the Lighthouse Cyclones club team.

Now they’re the starting strikers and the chemistry is there.

“I was really happy to see him here because we have played together before,” Cliggett said of his teammate. “He was more of an outside player, but he’s doing really well up top for us. He’s a good player and we work well together.”

Cliggett has a lot of experience playing with most of his team.

The Raiders did lose some very good players last year, but the vast majority of the team is back this year.

That raises expectations, and while the Raiders have looked good, they have had a few hard-luck losses, including one-goal setbacks to the Explorers and Crusaders. But the goal isn’t a regular season championship, it’s a Catholic League championship and Cliggett believes his team will continue to get better as the season goes on.

“We have a lot of experience playing together. We played in the Lower Moreland summer league and we played together last year, but we still have some new guys, so we’re still getting better as a team.”

It helps that they have one of the best leading them.

Cliggett has been on the field since he arrived at Ryan, and that makes him an elder statesman on the Raiders. When he was getting his feet wet, he had plenty of guys who were trying to show him the ropes, and now he’s happy to return the favor.

“I like being one of the guys on the team that help other guys get involved and help them with whatever they’re doing,” Cliggett said. “The younger guys can do great things. If I can help them, that’s great.

“I have to work harder to make sure other people get involved. But I’m not surprised at all at how good they’re getting, they’ve been doing really well in practice and it’s showing up in games.” 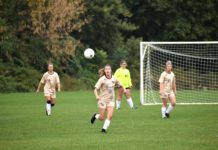 Tobin leads on, off field for Bambies 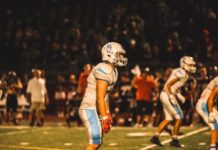 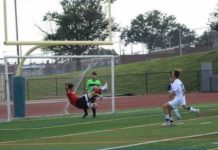